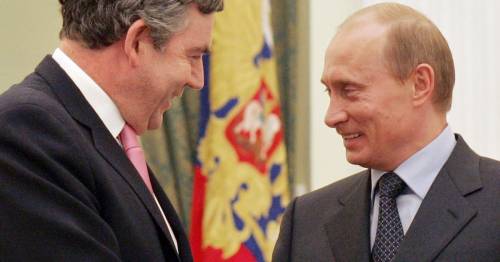 Gordon Brown has revealed he felt threatened by Russian tyrant Vladimir Putin during a trip to Moscow.

The then Chancellor visited the Kremlin in 2006 when he took a meeting with the president.

In a move to unnerve his British visitor, Putin took out a number of cards and read out information about him.

The incident left the future Labour Prime Minister under “no illusions” as to what his opponent was like.

He told the Telegraph Magazine : "I first met Putin in 2006 at the Kremlin, when I was still Chancellor…and I was put in a very low seat so that I was looking up at him.

Putin unnerved his British visitor during their 2006 meeting
(

“Anyway, that day he took out these index cards, and proceeded to read out all this information he had about me, as though he wanted to prove that he knew more about me than I knew about myself.

“So when people say that Putin’s changed and is only now threatening, I can tell you that he was threatening me even then.”

Mr Brown, 71, later took aim at the 150 countries who failed to impose sanctions on Russia following the brutal invasion of Ukraine in February.

He told Sophie Raworth on the BBC's Sunday Morning show: “I applaud NATO unity but there is a problem with coordinating sanctions where some countries are not prepared to do it.

“What we've also seen is global disunity – 82 countries refuse to support the action against Russia for its breach of human liberties, 150 countries around the world are not imposing sanctions, so we have global disunity.

“One of the reasons is we have not shown people that globalisation which is led by the West is working to reduce poverty, raise living standards and of course, deal with climate change in the poorer countries and really have to honour our promises.

“Two billion people remain unvaccinated despite the fact we have 24 billion vaccines being produced this year.

“And of course climate change promises to Africa have not been met.”

It comes as MI5 revealed dozens of Russian spies could be on the prowl in Britain in the wake of the Ukraine war.

The spy agency believes Putin has ordered all sleeper agents – under deep cover – to be ready to spring into action.

Spy hunters are already on alert for possible cyber attacks in response to the UK’s support for Ukraine.

Sources claim Putin has spies in all areas of British society, from top public schools to staff in the civil service and the House of Commons.

A senior intelligence insider said: “We have to assume Russia is now active at all levels of British society.

“They scoop up all forms of intelligence and pass it back to the Kremlin through handlers.”