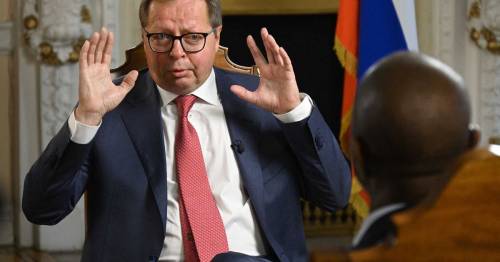 A Vladimir Putin ally has accused Britain of being 'arrogant' over the death sentence given to two Brits.

The men surrendered to the so-called Donetsk People’s Republic forces in Mariupol, and have since been sentenced by a court in the rebel region to be shot by a firing squad.

The pair were given one month to appeal, and the option to seek a pardon from a pro-Putin rebel leader who has gone on record saying he sees no reason for clemency.

Kelin was quoted by Russian state TV presenter Olga Skabeyeva as saying: “As for these two young people, who are mercenaries who fought against Donetsk as part of the Ukrainian army, I can say that there was an appeal from the British to us.

“They sent a note.

“But it was composed exclusively in arrogant and instructive terms.”

He claimed Britain “does not want to interact in these matters”.

The envoy did not give further details.

A third British detainee Andrew Hill, 35, a father of four from Plymouth, has also been warned to expect the death penalty when his verdict is handed down.

Laws in the DPR allow for an appeal for a pardon to the rebel region’s pro-Putin leader Denis Pushilin.

He has preempted the legal process by saying he sees no grounds to grant a pardon.

Previous : ‘I’m still left haunted over having to choose which drowning brother to save’
Next : Ukraine bracing for Russia cruise missile blitz with warships poised to launch attack – World News