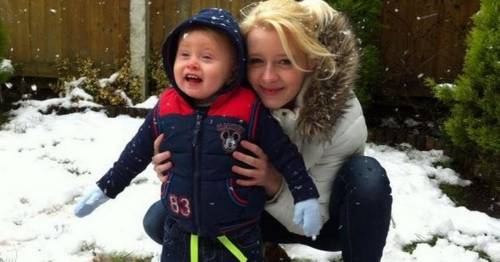 A violent ex-partner brutally stabbed a mum and her young autistic son to death before leading police on a 24-hour manhunt, a court has heard.

Daniel Boulton is alleged to have knifed his former girlfriend Bethany Vincent and her nine-year-old son Darren Henson, also known as DJ, "numerous times" while the subject of a restraining order on May 31 last year.

Boulton developed a "hatred" for Darren before the killings, Lincoln Crown Court was told.

A nine-month-old child was seen crawling around the house when emergency services arrived at the property in High Holme Road in Louth, Lincolnshire, the court heard, with the defendant later leaving a note saying: "I, Daniel Boulton, take full responsibility for 182."

The relationship between Boulton and Ms Vincent had "deteriorated" by the end of March 2019 and he was eventually ordered not to contact his ex-partner, jurors were told.

Boulton led Lincolnshire Police on a manhunt until the following day, when he allegedly stabbed an off-duty police officer in the leg in the Hubbards Hills area of Louth before being arrested on a nearby farm.

Bethany and Darren were found dead around 8.30pm
(

Prosecutors said there was "no dispute" Boulton stabbed both victims, with him denying the alleged offences because his ability to exercise self-control had been "impaired".

Opening the case against Boulton on Thursday, prosecutor Katherine Goddard QC said: "At around 8pm on the evening of May 31 last year, a young woman and her nine-year-old son were brutally stabbed to death in their own home in Louth.

"There is no dispute that the person who stabbed both victims was this defendant, Daniel Boulton.

"Mr Boulton's case will be that, although he physically carried out the stabbings of the two victims, he was, at the time, suffering from a recognised mental condition which substantially impaired his ability to form a rational judgement and exercise self-control."

Addressing the history between Boulton and Ms Vincent, Ms Goddard said: "The relationship between Bethany and the defendant began in about March 2019 and, like most relationships, at the start everything was good. Everybody appeared happy.

"But, by the end of that year, it had deteriorated and was marked by, the prosecution say, increasing violence from Mr Boulton towards Bethany and, later, towards her parents.

"Bethany made a complaint to the police about Mr Boulton and the violence and behaviour towards her, and Mr Boulton was made the subject of a restraining order precluding him from contacting her.

"A further restraining order was made after yet another incident in February 2021 but, despite both those orders, Mr Boulton continued to contact Bethany – by telephone, by text message, by social media messages, and by unannounced and uninvited visits to her home.

"None of that contact was sought by Bethany and, in fact, only a few days after her and DJ were stabbed to death, they were due to move to a new house – to an address unknown to Mr Boulton."

Ms Goddard continued: "Social services became involved with Bethany and her family after her first complaint to the police of domestic violence in November 2020."

Their concerns related only to the risk Mr Boulton presented to the family.

"He had, by then, expressed a hatred of DJ, a nine-year-old boy… who had been diagnosed with autism."

"He was seen running from an alleyway leading to the back of number 182.

"He seemed flushed, agitated, and called out to the witnesses to call an ambulance as someone had been stabbed inside.

"He then casually walked away, not waiting for the emergency services to arrive."

Explaining what emergency services saw when they entered the house, Ms Goddard said: "In the downstairs front room, they found Bethany lying on her side, half curled into a ball, clearly already dead.

"Upstairs, they found DJ, lying on his side alongside his bed, also clearly dead.

"Both appeared to have been stabbed numerous times and, in addition to obvious stab wounds, they had marks consistent with blunt force trauma – being hit by something."

Ms Goddard said a nine-month-old child had also been found at the property, "untouched and unharmed but clearly distressed and crawling through the house."

After allegedly making his escape, Boulton was said to have broken into a bungalow. The following day he ran into a police officer who he allegedly stabbed in the leg after a short confrontation.

He tried to flee but police "flooded" the area after the stabbed cop called them in.

Boulton, of Alexandra Road, Skegness, denies murdering Ms Vincent and her son, assault with intent to resist arrest, and burglary.

Previous : Mum stuns other parents by teaching son to use potty by himself at just 6 months old – World News
Next : Public transport crisis as 17% of bus routes at risk after Covid financial losses