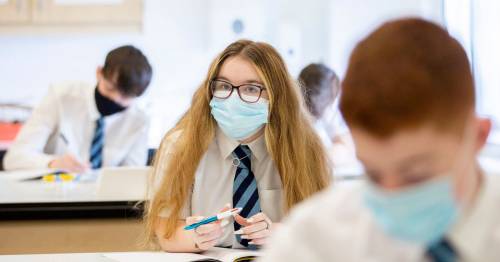 Unions are demanding masks be worn in secondary school classrooms to curb the spread of the Delta variant in schools.

The National Education Union, Unison, Unite and the GMB urged the Government to immediately reintroduce face coverings for older pupils in school to prevent outbreaks of the new strain.

The rules were scrapped at the start of the summer term but some schools in hotspot areas have already brought back masks guidance.

In a joint statement, the unions said: "Action must be taken now to make face-to-face learning safer over the remainder of the school term.

"Outbreaks mean bubbles, classes or entire year groups must be sent home. The priority must be to avoid any further loss of education." 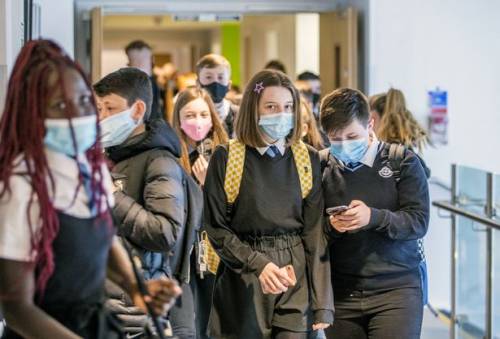 Secondary pupils were required to wear masks in schools during the latest national lockdown
(Image: PA)

The unions said staff and secondary pupils should wear face coverings "in all areas of secondary schools and colleges, including classrooms" with immediate effect.

They also called for pupils to be offered the Covid jab after the UK's medical regulator said the Pfizer vaccine was safe for children over 12-years-old.

It comes as concerning new figures show the numbers of pupils missing class due to Covid-19 rose in the week before half term, with worrying spikes in hotspot areas.

The North West has been hardest hit, with nearly a third (31%) of secondary pupils and a fifth (21%) of primary pupils in Bolton off school on May 27.

In Blackburn with Darwen, in Lancashire, 13% of secondary and 15% of primary pupils were self isolating before half term.

Overall, 116,000 pupils in England were off school due to potential contact with a Covid case on May 27, compared to 82,000 the previous week.

Another 26,000 pupils were out of class due to a possible contact outside school, up from 22,000 the previous week.

Geoff Barton, general secretary of the Association of School and College Leaders (ASCL), said: "We are clearly now seeing the impact of the Delta variant feeding through into these statistics, and this is reflected by the fact that absence is highest in areas that have been worst affected by the variant.

"This means that many pupils are having to self-isolate in line with Covid protocols and will be experiencing yet more disruption."

He urged ministers to use the "utmost caution" before any further easing of Covid restrictions.

Paul Whiteman, general secretary of school leaders' union NAHT, said: "We are hearing from our members that more and more schools are having to close multiple classes or 'bubbles', particularly in areas with higher case numbers, and revert to remote learning.

"One school told us that though they were not officially closed, six of their seven year groups were isolating due to Covid."

He added: "The Government must be proactive to ensure that transmission in schools, particularly in relation to the new variant, is not allowed to proceed unchecked.

"We must not sleepwalk into further widespread disruption to education."

A Government spokesperson said: “Attendance in schools remains high, and the data shows the steps we are taking to keep outbreaks of the Delta variant under control in schools are working.

“On top of robust measures in place across the country, such as increased ventilation in classrooms and keeping to small group bubbles, we have increased the availability of testing for staff and pupils in families in areas of high prevalence of the variant.”