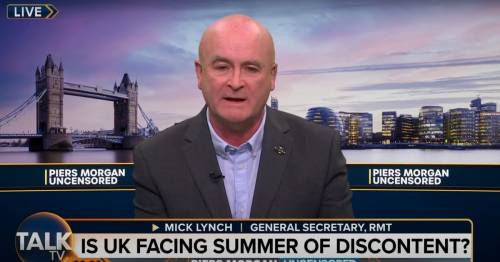 As the rail strikes continue and travel chaos resumes around the country, one man is finding fame as he bravely battles news bigwigs during live interviews.

Mick Lynch, 60, is secretary-general of the National Union of Rail, Maritime and Transport Workers and he firmly believes that people need a pay rise.

He has been in the job for more than a year – but has only become a household name over the last few days as he's appeared on television to explain why the railway strikes are occurring.

And it seems his words have cut through, just as actor Hugh Laurie wrote yesterday: “I don’t know enough about the rail dispute. I only observe that RMT’s Mick Lynch cleaned up every single media picador who tried their luck today.”

So far he's argued his point with Richard Madeley, who he accused of talking "twaddle", Piers Morgan, who spent two minutes discussing Thunderbirds rather than the issues at hand, and Kay Burley, who was "verging into the nonsense".

Now his antics have been shared far and wide as he becomes the internet's newest hero – so we've collected his best bits below.

What do you think about the rail strike? Let us know in the comments…

Mick clashed with Kay Burley during a Sky News interview
(

The Union man was praised for his exchange with Sky News anchor Kay Burley after she quizzed him outside a picket line in central London.

After she asked him what the union would do if agency workers hired by the government tried to cross the picket line, the 60-year-old had a cutting response.

He asked the journalist: "Do you not know how a picket line works?" as she repeatedly questioned what could happen if they take up posts left by striking workers.

He added: "I can’t believe this line of questioning… Your questions are verging into the nonsense. We run a picket as effectively as we can," he added, explaining that "picketing is standing outside the workplace to try and encourage people who want to go to work, not to go to work. What else do you think it involves?"

On Twitter, one woman wrote: "Mick Lynch schooling presenters on the media rounds is absolutely class. Such a refreshing sight compared to the political game-playing and spin we are constantly subjected to."

He commented: "Interesting interview. I think describing Mick Lynch as flustered is pushing it a tad. He comes across as almost scarily unflustered to me – I don't envy those who have to face him across a negotiating table."

Piers Morgan clashed with the union titan during a TalkTv interview, where the presenter decided to focus on Mick's choice of Facebook profile picture – an image of the Thunderbird’s villain The Hood.

Piers accused Mick of "wreaking havoc on the world", and said: "I’m trying to see where the comparison goes.

"The Hood was obviously an evil, criminal, terrorist mastermind described as the world’s most dangerous man who wrecked utter carnage on the public."

Mick calmly explained that the image was a joke, asking "can you see the likeness?"

But when Piers fails to drop it and address the issue, he responds: "Is that the level you're pitching this at Piers? That is a joke amongst me and my friends. I'm not comparing myself to anyone, I'm me.

"He's the most evil puppet made out of vinyl in the world, is that the level journalism is at these days?

He stood proud against Piers Morgan
(

"I’m a working class leader of a trade union that’s in a dispute over jobs, pay and working conditions."

Throughout the rest of the interview, Piers spoke over Mick and appeared to get flustered, but later claimed to have emerged the victor – bragging that he was trending on Twitter as a result.

But others weren't so sure, as many people commented on the video and praised Mick for keeping a cool head.

On YouTube, Chris Dwyer said: "Mick Lynch is correct in absolutely everything he says. Yes strikes are disruptive, but what shall we do as workers, take less and less when the lucky few just get richer and richer, somewhere and sometime we have to stand up for ourselves and other workers should know this. Stick together and lets change things."

And Jim Ginge added: "The media's attempt to vilify this guy who stands for working people is laughable and worrying at the same time."

Richard Madeley had no chance
(

Good Morning Britain host Richard Madeley was also on the chopping block and was stunned on Tuesday's show as Mick accused him of talking 'twaddle'.

Richard was hosting the ITV breakfast show alongside Ranvir Singh when they spoke to Mr Lynch live from London's Euston station.

As Richard and Ranvir began the chat with Mick, father-of-two Richard asked him: "Now, are you or are you not a Marxist? Because if you are a Marsixt then you're into revolution and in to bringing down capitalism. So are you or aren't you?"

Mick then cooly replied: "Richard, you do come up with the most remarkable twaddle sometimes, I gotta say. Opening an interview with that is nonsense."

Richard was clearly taken aback by his comment and fired back: "Woah, woah, I didn't say you are a Marxist, I'm saying that you are being accused of being a Marxist and that's called reporting!"

"No I'm not a Marxist, I'm an elected official of the RMT, I'm a working class bloke leading a trade union dispute about jobs, pay, conditions and service," Mr Lynch then said.

Previous : Boris Johnson says it would be ‘crazy’ for him to quit even if he LOSES crunch by-elections
Next : Young man, 22, dies while watching sunset at Summer Solstice celebrations in Dartmoor