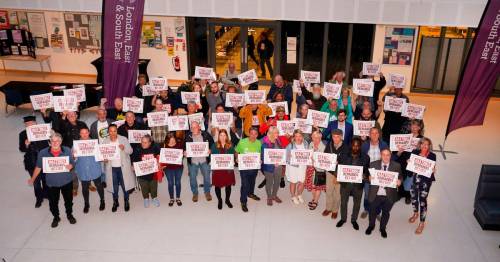 The 2022 clash is for decent wages on England’s southern coast in a town forever made famous by Norman invader William the Conqueror’s defeat of Saxon arrow-in-the-eye King Harold in 1066.

Conquer low pay, defeat poverty and a modern victory would be sweet for £9.50 an hour Fashola and breadline workers like her.

“One of the managers told us we were only cleaners,” complained the inspirational 26-year-old organiser with the RMT rail union.

“I’d like to see him do our jobs but this is a fight for all who are underpaid, endure bad conditions and are denied respect at work.

“People continually struggle to make ends meet no matter how hard they work and are trapped in a constant debt cycle. That isn’t right and we’re determined to change it.”

Fashola, unable to afford her own place so living with her mother, is a leader of the contracted out Churchill Cleaners taking industrial action on the rail network across South East England.

Hailed as heroes during Covid for keeping Britain moving safely, they aren’t the only workers sick of pathetic pay rates on or only a little above the minimum wage.

Hospital porter Paul Jones takes home an average £1,400 a month and works some nights and weekends.

Rocketing prices force him and his wife count every penny, now shopping in Lidl instead of Tesco.

“Eight years ago I was better off than I am now,” said Jones.

“I don’t go out at all. Me and the wife stay at home all the time. I don’t drink any more. I gave up smoking 11 years ago. How some people cope is beyond me.”

High above Hastings the ruins of our country’s first Norman castle gives spectacular views of the coast.

The old town’s charming and tall black wooden sheds on the shingle used to store fishing gear are architectural gems.

For decades it’s been one of the most deprived towns in the whole of England.

Hastings Foodbank manager Jon Wales quipped he’s the only person in the country who wished he was unemployed but demand is booming.

“I’d love to be out of a job but I won’t be doing that any time soon,” said Wales.

“The food crisis is becoming normal, people unable to feed themselves and their families.

“The answer is higher wages and a social security fit for purpose and we don’t have either.”

Hastings has so much in common economically and socially with the likes of Blackpool and Skegness the North-South divide is a flawed way to look at Britain.

The class divide between rich and poor is more accurate when Hastings and other parts of Southern England are as challenged as any in the North.

Life expectancy in the most deprived areas of Hastings is 11 years lower than affluent Crowborough less than a marathon run away in East Sussex.

Stroll through the shopping centre or along the seaside towards the fun fair and poverty in Hastings is never far away, the ghostly figures of beggars and drug addicts a grotesque scar on Boris Johnson ’s Tory Britain.

Robert Tressell’s iconic Ragged Trousered Philanthropists, the grim account of decorators trying to find work, was set in the fictional town of Mugsborough which in reality was Hastings.

Tressell was the pen name of house painter and sign writer Robert Noonan and his was a semi-autobiographical tale.

Published in 1914 three years after Irish-born Noonan’s death in Liverpool from tuberculosis, it’s a classic of working class literature and opened the eyes of many to the horrors of poverty and exploitation.

Simon, a refuse worker who fearing disciplinary action asked for his real name not to be used, said workers were still treated harshly and in the waste industry unfairly classed as unskilled to deny them higher wages.

“The little things that made it tolerable are also disappearing, like task and finish. Now you have to stay every minute,” he said.

“The only benefit for us now is to get a best a wage we can and do a decent job.”

Labour taking control of the council in last month’s local election is further evidence of fighting back against poverty, inequality and unfairness under the Conservatives.

Hastings’ new Labour leader, firebrand Paul Brand, said: “The people of Hastings, the town of Hastings, deserve better and we’re coming together to achieve that.

Previous : How to bathe your dog and keep them cool during sizzling 34C heatwave
Next : Vladimir Putin in chilling warning ‘nothing will be as it used to’ as Ukraine war rages – World News