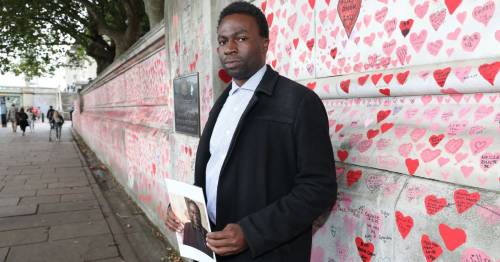 Families who lost their loved ones to Covid told of their despair after Boris Johnson was again snapped painting at a luxury Spanish villa.

They claimed if the PM was regretful for Government failings highlighted in a damning report he would bring forward the start date of the public inquiry.

Tory Party chair Oliver Dowden said Mr Johnson was sorry for the deaths – but, meanwhile, he was spotted at his easel for a second day running yesterday.

It followed the Commons report that confirmed thousands died unnecessarily during the pandemic – one of the UK’s “worst ever” public health failings.

As Brits struggled with food and fuel shortages, the PM was finishing his picture at the Marbella mansion owned by Tory millionaire Zac Goldsmith.

Wearing a navy shirt and casual trousers with a white tie-up cord, Mr Johnson occasionally scratched his head as he added strokes to his landscape piece.

But Rivka Gottlieb, 49, who lost her dad Michael, 73, last year, said the timing of the PM’s holiday was “very upsetting”.

She said: “Hiding from scrutiny and criticism just as this shocking report is released and while the pandemic continues to claim around 1,000 lives a week is nothing short of cowardly.

“Clearly, the Prime Minister doesn’t care enough about the lives and losses of ordinary people to behave as a leader should.

“This is precisely why we need an independent judge-led public inquiry so lessons can finally be learned and lives saved.”

She said Mr Johnson’s “incredibly callous” actions in Marbella showed how out of touch he was with the public back home.

Victims’ relatives want a say in the appointment of the inquiry chair and the terms of reference for the probe which is due to start next spring.

Wednesday's front page in the Mirror

The Boris Johnson painting memes have begun on Twitter…
(

Lobby Akinnola, of Covid-19 Bereaved Families for Justice, said people are agonising over whether loved ones might still be alive if the Tories had made different decisions.

He added: “The fact Johnson’s response is to slap the suncream on, whilst claiming he is ‘too busy’ to start the inquiry, speaks volumes about how we got here.

"If the Government is genuinely sorry for the losses that have been suffered, they will bring the inquiry forward to start immediately.”

Boris paints his own face in this meme
(

Was the PM drawing something – or someone?
(

Minister Dowden finally apologised yesterday to families – but not for the Tories’ handling of the pandemic.

He said the Government was “very sorry” for the losses, adding: “Yes, of course, I’m sorry, as the PM is sorry.”

Mr Dowden tried to defend No10 – claiming the pandemic was a “once in a hundred years event”.

Experts said thousands of lives may have been saved if there had been an earlier lockdown in March 2020 and
a circuit breaker last autumn.

Previous : Los Angeles Dodgers tab reliever Corey Knebel to start Game 5 against the San Francisco Giants
Next : GPs to be ‘named and shamed’ if they fail to see patients face to face