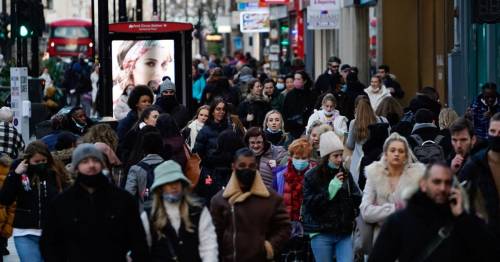 The UK's Covid response has been slammed as a "massive political failure" by experts after Tory claims the country could 'lead the world out of the pandemic'.

On Sunday Health Secretary Nadhim Zahawi said he hoped the UK 'will be one of the first major economies to demonstrate to the world how you transition from pandemic to endemic'.

But the figures show that despite such boasts Britain has had the fourth highest number of infections in the world and the seventh largest number of deaths per country.

The UK has suffered 150,000 deaths during the 21 months since the pandemic began, a number which continues to rise and is far higher than what comparable countries like Germany, Italy and France.

Prof Martin McKee, a professor of European Public Health at the London School of Hygiene and Tropical Medicine told the Mirror: "The UK’s record is a story in two parts"

He said the science had been "world class" and the NHS had been "fantastic" but on the other hand the country had been led by a "massive political failure."

He was far from alone in highlighting the huge successes of scientists and health workers in this country, and contrasting it to a lack of political support or common sense.

Here we look at just how 'world beating' the UK's Covid performance has been.

The UK has the fourth highest number of infections worldwide, behind the US, India and Brazil.

For much of the pandemic, two of those countries were led by presidents, Donald Trump and Jair Bolsonaro, who played down the danger of the virus or flat out said it was not a threat.

India's Narendra Modi, was accused of approaching the pandemic with “indifference” and prioritising politics over public health as he threw huge political rallies despite the risk..

To date the UK has registered 14.5M confirmed Covid cases, with the daily number of infections soaring into six figures just before Christmas.

With a population of 67M this counts for a significant portion of the home nations having had the virus, even accounting for reinfections.

When broken down per capita, the UK ranks 11th globally for cases per million people.

The UK has the seventh highest death toll from Covid on the planet with 150,000 and the worst in Europe.

In January 2021 the UK was recording nearly 2,000 deaths a day, and in the year since deaths have remained around or above 100 people a day.

This means around 20,000 people have died since the vaccine campaign took full effect.

The UK fares much better when it comes to the vaccine roll-out.

The country was one of the first nations to begin administering the life-saving jabs, beginning on December 8, 2020, with 90-year-old Margaret Keenan.

The vaccine campaign was successful in bringing down the deadliest wave of the pandemic, and has allowed some semblance of normal life since.

At times, the effort to vaccinate the nation has meant more than 1 million Brits getting the jab a day.

However, at other times, despite their successes, the government has let the campaign slump to far lower rates and been sluggish with pushing ahead with jabs, or preparing for school returns after summer.

When it comes to doses per 100 residents, the UK ranks 10th, ahead of the likes of the US, Germany and France.

And in boosters, the UK ranks fourth globally too.

As a global pandemic, vaccines are not just a domestic issue but an international one.

There has been criticism of Western nations for not doing enough to ensure other, less prosperous countries have enough doses of the vaccine for their populations.

Former Prime Minister Gordon Brown has accused the richest countries of stockpiling vaccine and that lives have been lost as a result.

According to Covax, an organisation dedicated to ensuring equitable and total access to jabs for everyone, wherever they live, the UK has promised 100M jabs. So far it has only delivered 18.2m of them.

This is roughly in step with other Western nations, at a rate largely accepted to be still not fast enough.

The pandemic has put the NHS under unprecedented pressure
(

WHAT DO THE EXPERTS SAY?

The UK has seen a tale of two pandemics, according to experts, with successes in the work of scientists and the health service contrasted by frequent political failure.

Prof Martin McKee, a professor of European Public Health at the London School of Hygiene and Tropical Medicine told the Mirror : "The UK’s record is a story in two parts. The science has been world class.

"We obviously think about the Oxford vaccine, but perhaps more important but less visible has been the RECOVERY trials, which showed what works (and what doesn’t), the OpenSAFELY work on data linkage, and the genome sequencing.

"Also the NHS has been fantastic, creating new models of care and rolling out the vaccine programme.

"On the other hand it has been a massive political failure. The Westminster government has consistently failed to engage with those on the ground, launching expensive and ineffective initiatives like the tracing programme.

"There has never been a clear strategy and messaging has been confused, likely because the Prime Minister struggles to reconcile the science and the ideology of his back benchers.

"He also struggles with the legacy of a decade of austerity that has left our institutions weakened and the toxic distraction of Brexit."

Michael McLennan, the founder and Chief Exec of Covid:Aid, a UK national Covid charity, also agreed that the pandemic had revealed "the very best of the UK" at times during the pandemic.

He continued: "Brilliant scientists and academic experts have led the way in protecting and saving lives, and there have been an amazing array of everyday heroes throughout the country – including key workers such as NHS and public sector staff, and also those helping out friends, family, and even complete strangers through acts of generosity.

"However, we at Covid:Aid have also seen the horrific effects it has had on those suffering from Long Covid, grief and bereavement, loneliness and isolation, and a range of other traumatic issues.

"There needs to be greater support, and already we are hearing from more and more who feel left behind – it will be a national tragedy should we ignore those who are most vulnerable, and those disadvantaged groups who continue to be at significant risk from the effects of coronavirus.

"We cannot forget the 150,000 lives already lost, the thousands more that will be lost this year, and the millions whose lives will never be the same again. "

Previous : Parthenon fragment returns to Greece, rekindling campaign for UK to hand over marbles
Next : Three Omicron warning signs that appear on your skin, according to new Covid data