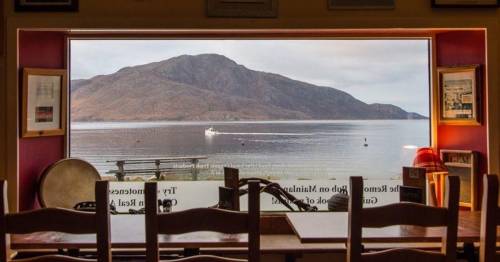 Mainland Britain’s remotest pub is on course to be taken over by locals after they were awarded more than £500,000 of taxpayers’ cash.

It comes on top of residents raising over £250,000 in record time from a community share offer to buy The Old Forge in the Scottish Highlands.

The pub can only be reached by boat or walking 18 miles over several mountains over 3000 feet – from the nearest road.

The community of just over 100 people on the west coast at Knoydart have been so successful with a bold fundraising campaign to purchase the distant drinking hole that it called time on its share offer a week early – by which point they had raised £256,035 from 91 members!

Have your say on this story in the comment section

Britain’s most remote pub, The Old Forge, in Inverie on the Knoydart peninsular, can be seen second from left in this line of properties
(

Now, the locally formed The Old Forge Community Benefit Society, has announced it has been awarded £508,000 through the Scottish Land Fund (SLF) to support the purchase and redevelopment of the pub, which is listed by the Guinness Book of Records as the remotest on mainland Britain.

Belgian owner Jean-Pierre Robinet has put it on the market at offers over £425,000.

Jacqui Wallace and Rhona Miller, co-chairs of the society’s management committee, said in a statement: “We are delighted that the SLF has chosen to support our community-ownership bid of The Old Forge.

"This project is of huge importance to Knoydart and we are now in a strong position to make it a reality.”

The group’s structure as a community benefit society ensures that locals and supporters will be in control of the pub’s future, and the businesses operations are defined with community benefit at the forefront.

Profits are reinvested back into the business and other local projects, not distributed among shareholder members.

Davie Newton, management committee member, said: “The Old Forge is on the market for offers over £425,000, but that figure does not include the owner’s asking price for goodwill of the business.

“We are currently working with the owner to undertake an independent valuation of the goodwill, and once this has taken place, we will be able to assess and submit an appropriate offer. “

Shares started at £25 for local residents, with non-resident applications having a higher minimum investment amount of £10,000.

Of the 110 local residents, over 30 have offered to volunteer their time to the cause and working groups have been set up for all aspects of the project from business planning and fundraising to post-purchase management plans.

The pub and restaurant is on the main sailing route to Skye, the Outer Hebrides and the Small Isles and attracts yachtsmen, hillwalkers and tourists, who flock to the area throughout the year.

Selling agents Baird Lumsden say:”For decades, the Old Forge has been the holy grail of the British outdoors community.”

Previous : NHS nurse who ‘always put patients first’ dies of Covid-19 after working on wards
Next : Doctor in vaccine plea after mum-of-three loses her feet and hands during Covid battle