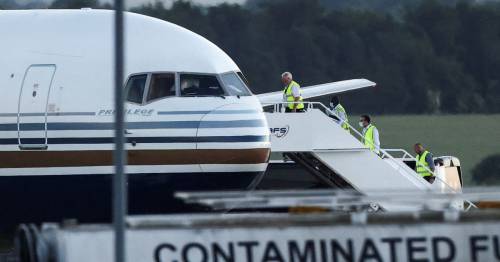 Ukraine refugees who arrive ‘illegally’ could be forced to Rwanda, Boris Johnson admits

Ukrainian refugees could be forced on a flight to Rwanda if they arrive “illegally” in the UK, Boris Johnson has admitted.

The Prime Minister confessed “that could happen” if people fleeing Putin’s war end up taking dangerous boats across the Channel.

Human rights campaigners have previously blasted the different way the UK treats refugees from countries like Iraq, who were almost forced to Rwanda last week, and Ukrainians who have been given a major visa scheme.

According to the UK, that means Ukrainians should not have to turn to small boats or fridge lorries chosen by more desperate migrants with fewer options.

But even the Ukrainian scheme has flaws. This week the UK tweaked its policy to include unaccompanied children after a four-year-old girl was sent back to Kharkiv.

Speaking to reporters on a trip to Rwanda’s capital Kigali, Boris Johnson did not rule out Ukrainians – if they decide to take “illegal” routes to Britain – being put on removal flights.

He said: “The only circumstances in which people will be sent to Rwanda would be if they come here to the UK illegally, and thereby undermine the safe and legal routes that we have.

“I think we are giving 130,000 visas to Ukrainians and they have at least two very good routes for coming to this country.

“But if you come here illegally, you're undermining all those who, who come here legally. And it's crazy.

“So I'm afraid the answer is I suppose, yes, in theory that could happen – but I think it's very unlikely.”

The Prime Minister will have tea with Prince Charles at lunchtime tomorrow after the royal reportedly branded the policy “appalling”.

Mr Johnson said he would urge the future King to have an “open mind” before No10 poured cold water on the PM’s comments, saying he was “unlikely” to raise it at all.

The PM also raised the asylum seeker deal today with Rwanda’s President Paul Kagame at the Commonwealth Heads of Government meeting in Rwanda.

No10 bizarrely described it as “successful” despite Britain handing over £120m, some of which is already being spent, without any asylum seekers yet being forced to Kigali.

That is despite the UK government saying last year it was concerned about "restrictions to civil and political rights and media freedom" in Rwanda, and "allegations of extrajudicial killings, deaths in custody, enforced disappearances and torture.”

Human Rights Watch has also warned Rwanda is not “a safe third country to send asylum seekers to”.

But government spokesperson Ms Makolo hit back: “They’re not only outdated but they’re unwarranted accusations.

“There’s nothing wrong with human rights in Rwanda. Human rights are a work in progress in every country.”

She added: “An organisation that constantly keeps hammering at us obviously doesn’t make any sense to me and to us.”

Asked for her comment on Prince Charles’ reported criticism of the policy, Ms Makolo said: “It’s not for me to say.

“What we do know is that we’re offering people a home, we want people to feel safe and welcome here.

“We think that’s a good thing to do.

“And with the partnership we have with the UK and investment the UK is making into this partnership, we feel we can make it happen and give a decent life and opportunities to the migrants and it will also benefit Rwandans.”

Previous : Who is Ben Wallace? Marriage to ex-assistant, recovering Diana’s body and torture comments
Next : Brit couple’s ‘nightmare’ as they’re thrown off flight by armed police for no reason – World News