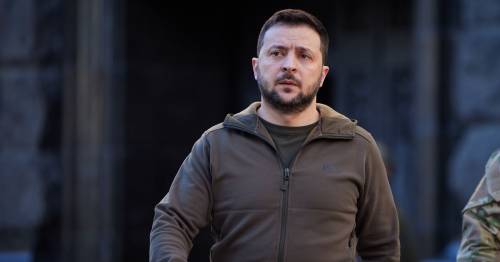 Ukrainian President Volodymyr Zelensky’s iconic fleece jacket has sold for £90,000 in a fundraising event for the country devastated by the Russian invasion.

As Ukraine battles against the greater military strength and resources at the disposal of Vladimir Putin, auctions have been taking place to raise money for their cause.

Christie’s is part of an international programme with the aim of raising up to £1 million.

Boris Johnson tried to encourage the bidding at the auction for Mr Zelensky’s now famous khaki fleece at the auction in London where the starting price was put at £50,000.

The prime minister called it a “snip” as he motivated people at the Christie’s auction held at the Tate Modern.

Mr Zelensky has been seen regularly giving updates in video calls from Kyiv wearing his military uniform and standing up to the threat from the Russian forces.

He also spoke to the House of Commons from Kyiv asking for support from the UK as he described it as Ukraine’s hour of need and compared it to the Battle of Britain and the Blitz during the Second World War.

Mr Zelensky spoke via video link before the start of bidding at the Brave Ukraine fundraiser and he talked of “brave Boris” who had come to see him in Kyiv.

There were other items up for auction in the lot, including a cockerel jug which had been given to Mr Johnson during his visit to the Ukraine capital.

Also there was a guided tour of Kyiv by the mayor and former heavyweight boxing champion Vitali Klitschko.

“Support Ukraine tonight my friends so that great ancient European capital Kyiv can never be threatened again, and that Ukraine can be whole and free once more.”

It comes as US President Joe Biden signed a $150 million weapons package for Ukraine on Friday, providing additional artillery munitions, radar and other equipment in the latest in a series of transfers to help Kyiv repel Russia's invasion.

Biden and other Western leaders plan to hold a video call with Zelenskiy on Sunday, the White House said, in a show of unity.

The UN Security Council – including Russia – expressed "deep concern" over the situation in Ukraine, its first statement since the February 24 invasion.

The most severe sanctions ever imposed on a major power have resulted in Russia's $1.8 trillion economy heading for its biggest contraction since the years following the 1991 break-up of the Soviet Union.

But the new package of sanctions, which includes an oil embargo, has run into some opposition, with Hungarian Prime Minister Viktor Orban likening that to an "atomic bomb" dropped on the economy.

Previous : Mum’s warning as boy loses fingers and toes after waking up with horror rash
Next : ‘My abortion clinic was burned to ground – fanatics think nothing of taking life’