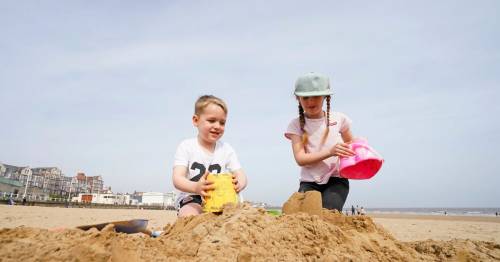 UK weather: Temperatures to be hotter than Turkey this week before 26C mid-May heatwave

Brits are set to bake in temperatures hotter than those in Turkey this week as summery weather finally takes hold in parts of the UK.

Meteorologists have predicted that the mercury may slip as high as 26C in parts of the country this week, after blue skies and sunshine dominated over the weekend.

Although not all of the country is expected to bask in sizzling hot rays over the coming seven days, next week looks set to be an absolute stonker across the whole of the isles.

The week will begin with warmth and sunshine
(

Today the best of the weather will be enjoyed in the South East, where temperatures are expected to stay comfortably into the twenties until the early evening.

London will gently bake in highs of 21C, while Turkey’s capital Istanbul won’t get hotter than 19C until the weekend.

The South East and South West are forecast to have the best of it over the next seven days, with long stretches of warm sunshine and no rain firmly on the cards.

The mercury could even soar to a sizzling 26C down south before the week is out – meaning some of us are in for the hottest day of the year so far.

The South will have the best of the weather this week
(

That would comfortably best the 23.4C that was recorded on Good Friday in St James Park, London.

In the rest of the UK the picture is a more mixed one.

In Manchester, Liverpool and Cardiff temperatures will stick in the high teens for most of the day, but the chance of wind and heavy outcast cloud creeping in on Tuesday and Wednesday are significant.

The further up the UK you go, the colder it is going to be this week, with Edinburgh and Belfast dealing with more modest 13 and 14Cs, and drizzly spells.

Meteorologically speaking the North East will have more in common this week with the South, as cities including Newcastle and York are tipped to avoid any rain and enjoy temperatures around the 20C mark.

Brits who were able to make the most of the sunshine this weekend are advised not to pack away their paddling pools just yet.

Saturday and Sunday will see a ratcheting up of temperatures ahead of what will be the most sustained and intense period of sunny weather this year so far.

From Monday May 16 to Friday May 21 all of the UK will revel in temperatures comfortably above 20 degrees, while England will be closer to 25C for most of the week.

This could be the start of a welcome trend running through the high summer months.

The Met Office’s three-month outlook put the probability of hot weather this summer approaching double that of normal years.

It said there was a “40% chance” the summer “will be significantly hotter than average”, with only a 10% probability of a cooler than normal season.

The record for the UK’s hottest day is 38.7C set in Cambridge recorded in July 2019.

Scotland and Northern Ireland cloudy and windier with rain at times, this reaching north-western parts of both England and Wales later.

Otherwise England and Wales mostly fine with sometimes hazy sunshine, leading to a warm day especially in the southeast.

Rain will continue south-eastwards, although easing and probably not reaching the southeast corner of England.

A much milder night in the south. Further north, cooler with clear spells and showers.

The chances of a hotter than usual summer are good
(

Outlook for Wednesday to Friday:

Scattered showers affecting Scotland and Northern Ireland and rather cool.

Spell of rain on Wednesday affecting England and Wales then becoming drier and brighter with temperatures around average.