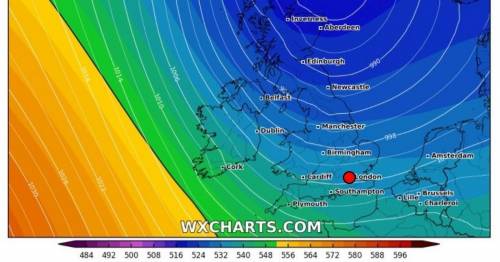 Brits will be blasted by an arctic freeze this week with the mercury set to plummet as the country shivers in a -2C icy blast.

Forecasters predict that some regions will see snow fall in the coming days as most regions barely stay above zero degrees.

The coldest regions will be in the north where experts predict it will be a frosty start for some on Monday.

While most of England will stay dry and bright it will be a chilly day for the whole nation with the temperature expected to drop.

An Arctic weather front has brought in freezing cold conditions all across the UK, beginning in Scotland before moving down the country.

It will drop to sub-zero temperatures in some regions
(

During the week, the freezing temperatures will push their way towards Wales and parts of the South as winter looks to be arriving early this year.

The Met Office predicts that temperatures will fall below average today before conditions become even colder and the chance for snow begins to rise.

In the far north in the coming days forecasters expect 'heavy and wintry showers' to fall.

Snow is likely to fall in the coming days
(

And with December approaching it could be getting even colder soon.

A weather map for Friday
(

It reads: "As the period continues winds will be typically from the north and northwest allowing cold conditions to persist.

"High pressure is likely to sit to the south or southwest of the UK, bringing possible rain and showers to the north, wintry on high ground and perhaps at lower levels at times.

"Likely drier in the south, often largely settled with clear/sunny spells. Rather cold at times, with overnight frost likely."

Many places dry with plenty of sunshine after a cold start. A few showers affecting east and southeast coasts of England. Turning milder and cloudier across northern Scotland with a little light rain or drizzle in places.

Increasingly cloudy in the north with a few spots of light rain or drizzle. Clear skies in the south allowing a widespread frost and a few fog patches to form.

Cloud in the north will spread further south across the UK, with a little drizzle on coasts and hills. Sunnier skies probably persisting across southern England

Outlook for Wednesday to Friday:

Settled with fog in the southeast at first. Rain spreading south, with sunshine and blustery showers following, wintry in the north. Unsettled for most on Friday, wintery in the north.