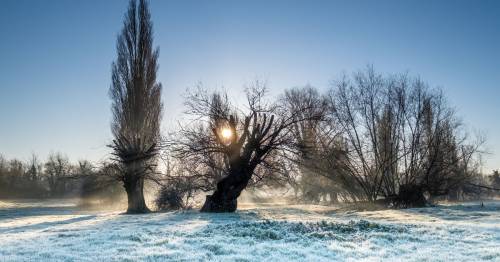 Snow is expected to hit the UK in the next fortnight, as flurries are forecast across the country as temperatures plunge to -5C in some places.

While Brits entered the new year with some unseasonably warm weather , winter has come back with a vengeance.

Temperatures have plummeted around the country in recent days, and forecasters are predicting millions will receive a heavy blanketing of snow amid a freezing arctic blast before the end of January.

According to Sun Online reports , WX Charter predicts snow will fall in Scotland on Friday January 28, before moving south to hit the north of England that evening.

East Anglia is predicted to be hit with wintry showers early on January 29, before parts of the country between Aberdeen and Hampshire will then see snow on Sunday January 30.

Temperatures today will drop as low as -5C for some, as the Met Office has issued a yellow warning for thick fog stretching from the south-east through central England towards Tyne and Wear.

It has been a week of dense fog and icy conditions for much of England, with milder weather in Scotland, though Sunday is expected to see clearer skies move in.

Frost and fog is set to be a hazard for wide parts of the UK on Saturday, specifically around the South East, central England and stretching up to Newcastle, where the fog may remain all day and temperatures not rise above zero.

The Met Office urged everyone to "get the hot water bottles at the ready as it's set to be a cold and frosty night."

WX Charter predicts snow will fall in Scotland on Friday January 28, before moving south to hit Newcastle that evening
(

With fog patches set to spread overnight, the warning states that "some dense fog patches are possible, with visibilities perhaps dropping to between 50-100m in a few places".

People have been told to expect: “Impaired visibility leading to hazardous driving conditions in places and probable slower journey times especially by road, delays to bus and train services are possible. There is a chance of delays or cancellations to flights."

Met Office forecaster Aidan McGivern said that there could be clear skies in north west England and north Wales but for most of England there is going to be fog and low cloud.

He said: "Clear at first and then mist and fog soon form especially across parts of the Midland and into eastern England where it will be dense in places and there is a fog warning in force. There will also be some fog elsewhere but also low cloud for much of south Wales, central and southern parts of England."

He continued: “A widespread fog across England and Wales with temperatures in some sheltered spots down to -3C and -5C. So a freezing foggy start to the day once again on Saturday and those stubborn fog patches perhaps continuing all day in places, for example in eastern England and so watch out on the roads first thing for that.

"Otherwise a lot of low clouds across England and Wales."

It was a chilly, foggy morning in Finsbury Park, north London today
(

The mist and fog patches have been given the chance to form because of light winds and high pressure across the UK meaning the air is not moving very quickly.

Clearer night on Saturday but still cold and drizzle means that there will be some bright spells on Sunday.

The longer-range forecast provided by The Met Office suggests “colder interludes” between January 29 and mid-February, although temperatures were expected to be “slightly above average”.

Previous : Princess Beatrice will not give evidence in Prince Andrew’s sex abuse case
Next : Kazakhstan says 225 bodies delivered to morgues during unrest