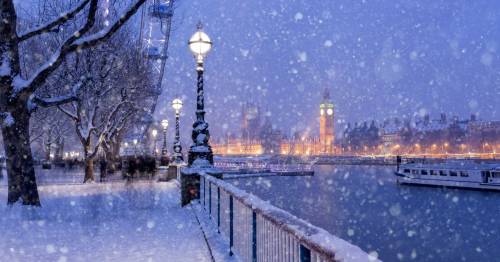 UK weather: Snow to fall in London within days as forecasters warn of Arctic blast

London and the rest of the UK is facing a chilly few days as an Arctic blast sweeps its way through the country – with warnings snow could be falling throughout the capital this week.

Experts have predicted temperatures as low as -2C could be felt in parts of the country, with snow potentially falling in most regions.

However, the Met Office has warned that although flurries are likely, the likelihood they will settle is not.

The freezing temperatures are expected to last for around 10 days, so it may be worth digging out your hats, gloves and scarves to really fight off that chill.

Forecasters at WX Chart say that by Friday, people living as far down as the West Midlands could se up to 6cm of snow.

It's unlikely there will be scenes such as this in London
(

And Wales could see up to 10cm of snow drop.

Birmingham has also been given a 70% chance of snow by the coming weekend.

But the icy temperatures do not mean we will be living in darkness, as bright sunshine is expected across the UK, making the perfect winter cold snap.

However, a yellow weather warning has been put into place for wind over the coming days stretching into the weekend, with gusts of up to 80mph predicted.

Met Office forecaster Oli Claydon told the Mirror: "This evening we've got a relatively settled day, the change really starts from tomorrow when we've got a cold front moving into the north west from this evening.

"This will sink sound across the UK through Wednesday, bringing cold weather behind it with temperatures dropping off this week.

"The highs and lows this week will be around 11C in Cornwall, and then going down to -2C in Scotland.

"As the cold front sinks south, the over night temperatures could sink to -4C, and even as cold as -6C in Scotland.

"Through Thursday expect to see some showers, you might see some snow falling , although that is not unheard of in Scotland this time of year.

Colder weather is on the way
(

"There are a couple of wind warnings through Thursday and Friday, with gusts up to 80mph."

The Mirror was previously told that deep snow will cover the mountain tops of Scotland on Wednesday before slowly moving southwards over the course of the week.

A spokesperson said: "This snow will build in for the high ground of Scotland from Wednesday, and will likely persist in high areas through to the weekend.

"Coupled with this will be some gusty winds on Wednesday with up to 50knot gusts possible in the far north.

"That windy theme will persist for the northwest in particular later in the week and into the weekend."