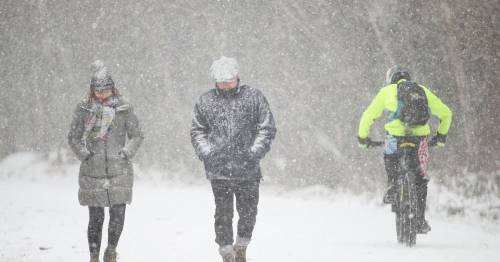 Snow is going to hit the UK within hours, with forecasters warning it could land "almost anywhere".

According to meteorologists, most areas in the country could see some snowfalls from Friday to Sunday.

The Met Office said this weekend will be cold and windy, with snow expected especially in Scotland, northern England and parts of Wales.

Up to 20 inches (50cm) of snow could fall over the Cairngorms in the Scottish Highlands, according to the Weather Outlook.

In the North East, up to 3 inches (8cm) could fall, forecasters said.

Light snow showers could fall in the Midlands and the South East too.

Forecasters said this weekend will be cold and windy
(

Met Office spokesman Grahame Madge said: "We’ve got an unsettled period of weather over the next few days, with wind warnings out for Scotland and Northern Ireland to begin with on Friday.

"This will extend to the whole of the UK apart from London and the South East on Saturday, with strong winds expected.

"There is an increasing signal of snow at higher elevations, indications suggest that areas above 200m in Scotland have the highest chance from Friday.

Disruption to transport is likely due to a storm this weekend
(

"There may well be temporary spells in other areas across northern England and Wales, in areas like the Pennines and Snowdonia, though this unlikely to be heavy enough to settle."

Storm Arwen is set to move in across the UK bringing with it 75mph winds which could cause travel disruption and damage to buildings.

The Met Office has issued an amber wind warning for parts of north-east England and Scotland from Friday afternoon, lasting until Saturday morning.

Most parts of the country could see snowfalls from tomorrow to Sunday, the Met Office said
(

It says that flying debris leading to injuries or danger to life is "likely" with people also told to expect damage to trees and buildings, public transport cancellations, road and bridge closures, power cuts and large waves.

Yellow wind warnings are also in place across most western parts of the UK on Friday, extending to the rest of the country on Saturday.

Gusts are expected to reach 55 to 65 mph in parts of Scotland, Northern Ireland, Wales, south-west England and north-east England with the highest to be seen in coastal areas.

Cold winds are forecast in the coming days
(

Met Office spokesman Stephen Dixon said: "Storm Arwen has been named on the back of a deep low-pressure system moving to the north-east of the UK, which has brought about our amber wind warning on Friday.

"The worst affected areas will predominantly be on the coasts, with gusts of over 75mph bringing possible disruption to travel and longer journey times, power cuts, flying debris and large waves with beach material being thrown around.

"There is also a yellow warning of wind in place along the west coast of the UK from 9am on Friday, stretching from Scotland, through Northern Ireland and Wales and as far as south-west England.

"This reflects the impact Storm Arwen will have, with strong winds likely to occur into Saturday, when the warning is extended to most parts of the UK.

"The south-east and London, though fairly windy, are likely to escape the worst of the gusts and remain relatively calm in comparison to the rest of the country, which will certainly feel the impact of the storm."

He said Storm Arwen is moving in from the North Sea and will begin to travel south before easing on Sunday.

The Met Office names storms on the back of their potential impact, with Storm Arwen declared as the result of the amber wind warning.

Mr Dixon added: "As Arwen causes disruption there will also be the chance of snow in the coming days, especially in the higher regions of Scotland and northern England.

"There may also be some snow in the lower ground region of northern England, though this is likely to be short-lived and fall in the form of sleet or wintry rain.

"It comes on the back of a fall in temperature, with parts of rural Scotland and England to drop below freezing during the night."

The RAC has advised drivers to prepare for strong gusts by slowing down and being "very careful" when passing high-sided vehicles or cyclists.

Cyclists have been told to be careful when heading out
(

Spokesman Simon Williams said: "In extreme windy conditions, bridges may also be closed and trees may fall so it's important to allow extra time for journeys.

"With forecasters predicting strong winds together with colder conditions, drivers should take this opportunity to prepare their vehicles for winter by checking oil and coolant levels, ensuring they have enough good quality screen wash that protects down to well below minus 10C, as well as having properly inflated tyres with good tread."

Meanwhile, William Hill's odds on a White Christmas have dropped to their lowest levels since 2017.

William Hill spokesperson Rupert Adams said: "It appears that this latest cold snap has arrived right on time and it is part of a bigger narrative which is expected to play out right up until the big day.

"With each passing week, the case for a White Christmas becomes more convincing."

Clear and frosty in south, but clouding over later. Rain, heavy in places, moving south across northern and central parts, briefly falling as snow over hills in north. Becoming windy.

Rain, some heavy, moving south, then colder with blustery heavy showers, falling as snow over high ground. Severe gales into northern areas with blizzards in the Scottish mountains later.

Cold Saturday with mixture of rain, sleet and snow showers, accompanied by gales. Improving through Sunday; widely fine after frosty start, but further cloud/rain slowly spreading in from the west.

Previous : Keir Starmer asks ‘conman’ Boris Johnson ‘is everything OK?’ in vicious PMQs spat
Next : Gay man attacked with hammer while walking down street with boyfriend