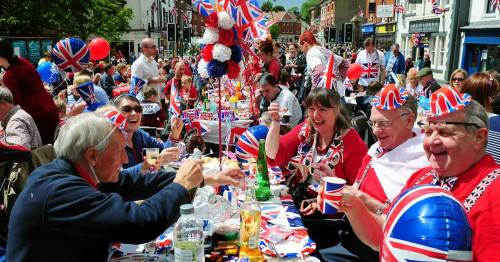 Brits enjoying the Queen’s Platinum Jubilee at the beginning of next month are to experience "very warm weather" with dry conditions enveloping the UK, forecasters say.

Millions of Brits are looking forward to the four-day public holiday kicking off on Thursday June 2 to mark the monarch’s incredible 70 years on the throne.

Huge celebrations are being planned with the RAF’s traditional Trooping the Colour flypast over Buckingham Palace as well as scores of street parties held by people at home.

A massive £15million budget has been set aside for the royal celebrations – and the good news is so far it appears the weather is going to stay dry to make it even more special.

The Met Office ’s long range forecast so far says: “A change in weather is likely as we move from May into June, with a shift towards more settled, drier conditions.

“We can expect temperatures to continue to be warm or very warm, but likely to move back to nearer normal through June.

“Showers still remain a possibility in some places, but a drier end to the period is likely for most.”

With three weeks still to go however, the weather still might change for the worse.

A spokesman added: “The long range forecast shows a trend towards more settled and drier conditions at the start of June.

“However, showers remain a possibility through the long range period and it’s not yet possible to pinpoint specific places or days.

“In early June, temperatures are likely to be nearer average, although much will depend on the conditions on the day.”

The average temperature in June is 19C.

The Queen previously decided only working Royals will be allowed to stand beside her during the historic event on the balcony, meaning her favourite son Prince Andrew will miss out.

Also set to miss another family occasion are the Sussexes, although they previously revealed they had “never asked” for the honour.

The Sussexes will be missing from the balcony
(

It will be the first time the Royal Family have appeared on the balcony since before the pandemic, at the Queen’s official birthday in 2019.

There will be 18 members ­gathered for the photo. Despite her working royals-only rule, she made an ­exception for ­Princess Anne’s husband Vice Admiral Sir Tim, as he is a “frequent attendee and support for the Princess Royal on engagements”.

But there is no room for Andrew’s daughters, Beatrice and Eugenie, or Princess Anne’s ­children Zara Tindall and Peter Philips.

There are fears the Queen’s recent mobility issues- which caused her to miss the state opening of Parliament on Tuesday, could limit her appearances over the weekend.

A Palace spokesman said: “The Queen is looking forward to the weekend and will be taking part in the celebrations but her presence will not be confirmed until nearer the time.”

Previous : Boris Johnson summons Cabinet to away day as pressure mounts to help with cost of living
Next : Dog who can’t walk, play or sleep in desperate need of life-saving surgery