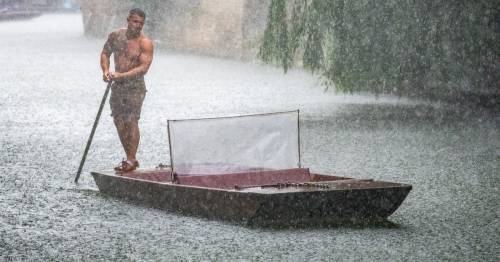 UK Weather: Heatwave to come to dramatic end this weekend with thunderstorms and rain

A blistering heatwave which has sizzled the UK over the last few days is set to end abruptly with thunderstorms across much of England and Wales.

Forecasters have warned that by the weekend heavy rain and thundery showers will lash swathes of the UK.

The Met Office has issued a yellow weather warning across much of England and Wales on Saturday and Sunday, saying heavy rain and thundery showers could cause flooding and transport disruption.

Meteorologist Tom Morgan said that while some areas within the warning zone could see a month's worth of rain, the storms were unlikely to be as bad as those seen on Tuesday.

Windows were smashed and gardens "flattened" by hail in some areas, with residents describing the hailstones in Kibworth, Leicestershire, as "tennis ball sized". 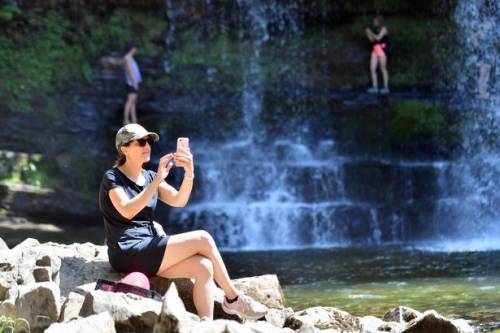 Mr Morgan said: "In contrast to yesterday when it was really torrential downpours and heavy hail, the weekend weather is just going to be more generally wet."

The weather warning was issued the day after England reached its hottest temperature of the year on Tuesday – 32.2C recorded at Heathrow Airport in west London.

The mercury rose to 31.1C in North Wyke, Devon, on Wednesday, while a provisional all-time record for Northern Ireland was set when 31.3C was logged at Castlederg, Co Tyrone, the Met Office said.

It comes only a few days after the previous record of 31.2C was set at Ballywatticock, Co Down, on Saturday. 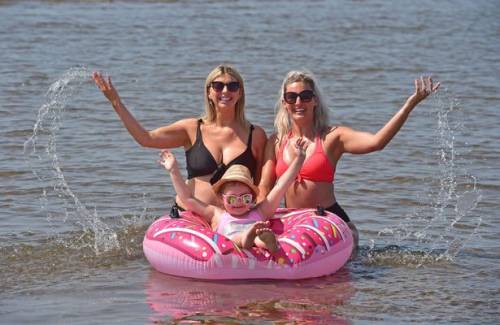 Scotland saw a top temperature of 28C in Eskdalemuir on Wednesday while 30.8C was recorded in Usk in Wales.

Meanwhile, emergency services have urged people to be aware of the dangers of going into open water following 12 confirmed water-related deaths in the last four days.

Derbyshire Police said the body of a 15-year-old boy has been recovered from a stretch of the River Trent in Swarkestone after he got into difficulty while swimming in the water on Tuesday. 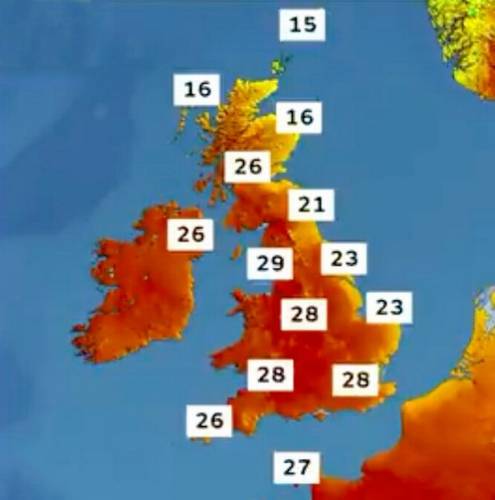 Temperatures will once again soar today 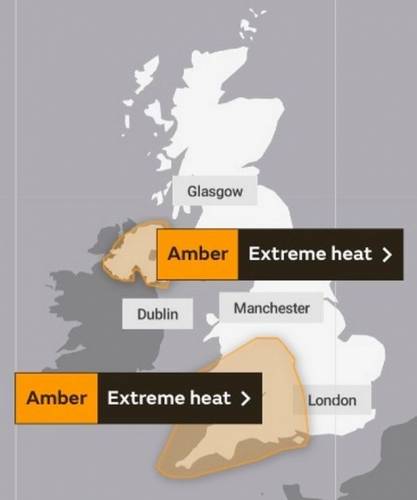 Mr Morgan said that temperatures will begin to cool down slightly on Thursday and Friday with the mercury dropping to the high 20Cs on Friday.

Local authorities have reported having to carry out urgent repairs to roads which have melted in the heat.

Public Health England has also extended its heat-health warning, which warns people to take measures to stay cool and look out for vulnerable people, until Friday.

Another hot, dry and sunny day for most. Isolated afternoon showers may affect parts of Wales, northern and central England and more cloud in western parts turning sunshine more hazy. Cloudier in the far north.

Another clear and warm night in western parts but cooler in the east with more cloud spreading in from the North Sea. Mostly dry however.

Still hot and sunny in western parts. Eastern areas cooler with cloud slowly clearing back to the coast. Perhaps some rain arriving in the far southwest later.