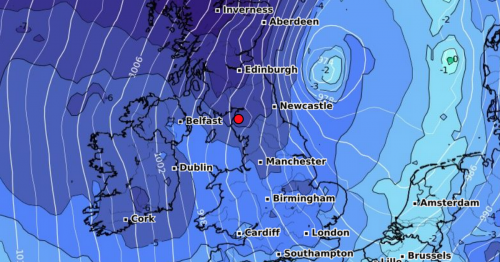 Brits are facing several days of snow, sleet, rain and severe 80mph gales as an Arctic freeze takes hold of the country.

Up to 20 inches (50cm) of snow could fall over the Cairngorms in Scotland in the coming days, with “prolonged periods” of snowfall possible at higher elevations in northern England and Wales as well.

Snow will be possible "almost anywhere" between Friday and Sunday, the Met Office said.

Maps are predicting temperatures close to zero for Thursday morning with the colour blue for areas around the country, and the cold weather is set to remain in place well into December.

Radar showed snow falling over higher ground in Scotland overnight, and the colder weather was expected to extend to lower levels as icy air blows in from the Arctic.

Cold weather is set to sweep in
(

More snow is predicted on Friday in Scotland, northern England and parts of Wales, and it is likely to continue over the weekend where there are also weather warnings in place for strong winds up to 80mph.

It will come after “several shots” of Arctic air move into the UK later this week, as the jet stream dips southwards, bringing much colder and wetter weather.

The snow is expected stick around for days and fall heavily with the Weather Outlook anticipating up to 20 inches (50cm) of snow in the Cairngorms in Scotland over the weekend.

Parts of the North East is forecast to accumulate up to 3ins (8cm) during the same period and the maps indicate light snow showers could fall in the Midlands and the South East.

Yellow weather warnings are in place across parts of Scotland and Northern Ireland on Friday, extending to the rest of the UK on Saturday.

The Met Office said that “very windy weather” could cause delays to transport, damage buildings, lead to bridge and road closures and cause power cuts.

Grahame Madge, a Met Office spokesman, said: “We’ve got an unsettled period of weather over the next few days, with wind warnings out for Scotland and Northern Ireland to begin with on Friday.

“This will extend to the whole of the UK apart from London and the South East on Saturday, with strong winds expected.

“There is an increasing signal of snow at higher elevations, indications suggest that areas above 200m in Scotland have the highest chance from Friday.

“There may well be temporary spells in other areas across northern England and Wales, in areas like the Pennines and Snowdonia, though this unlikely to be heavy enough to settle.”

Temperatures have already started to drop in many parts of the UK after a largely mild November and it will turn colder still for the rest of the week.

Mr Madge added: “Friday and Saturday, though bright and clear, will be quite cold with a chance of more prolonged periods of snow at higher levels, but we’re not anticipating anything at lower level.

“Though not exceptionally cold temperatures during the day, many places could drop to around freezing overnight.

“The coldest day temperatures for London and the South East will be around 6C on Saturday, though this isn’t particularly rare for the time of year.”

Dry and bright for many.

Wintry showers in the far north though, and also a few showers in some North Sea and Irish Sea coastal areas.

Rain will clear on Friday, severe gales and wintry showers following by Saturday.

Snow possible almost anywhere, but only settling on hills.

Previous : Indonesian court orders govt to amend jobs creation law
Next : Boy, 8, with Covid left in coma after having rare side effect seen in children