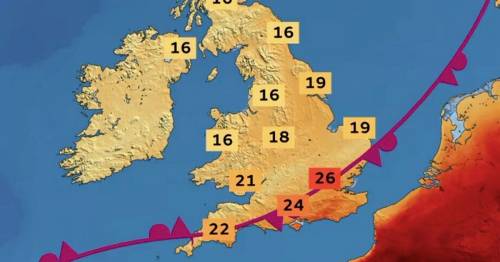 Brits are set to see temperatures plunge by nearly 15C in parts of the country today following the hottest day of the year so far.

The mercury rose to 33C in parts of the South East on Friday due to the hot air that was moving north from Iberia and saw hot temperatures across much of the UK.

It came as Spain saw temperatures of 44C and in southern France there was another record high for this time of the year at 43C, while in Paris it notched up 35C.

As many basked in sunny conditions on Friday, it was a lot cooler in the north west of the UK due to a low pressure where it was no warmer than 16C.

And that milder weather is set to move south affecting much more of the country today.

The Met Office has said the Midlands may see temperatures fall to 15C after seeing highs of 29C on Friday as well as some rain after gusts of hot continental air swept across the UK.

As a result of an influx of cooler Atlantic air, the mercury is predicted to drop across Scotland, Wales, Northern Ireland and the majority of England.

"More and more of us are going to get into those cooler conditions as we head through Saturday. We’ve got this frontal system pushing southwards," said BBC weather's Ben Rich.

The North West is predicted to have a 11C fall from 25C to 14C while the south coast, meanwhile, is expected to keep hold of the scorching temperatures, so could see highs of 30C.

Mr Rich continued: "A cold front introducing that cooler air so these are the temperatures as we start Saturday 9C or 10C for Scotland, Northern Ireland and the far north of England.

"Whereas further south we are still in the grip of those warm, even hot conditions, 18C to start the morning in London and in the south east corner where we see spells of sunshine it will be another hot day.

"Across parts of the west country, Wales, the Midlands, East Anglia we will see cloud bringing outbreaks of heavy, potentially thundery rain at times."

On Sunday, rain is predicted for the southern parts and the north while other regions are expected to have sunny spells.

Meanwhile, a flood warning is in place in England and Scotland.

Spring tides have prompted a flood alert – which warns that flooding is possible – in south west London for the Tidal Thames riverside from Putney Bridge to Teddington Weir at 6.45am.

A Government statement said: “River levels are expected to be high as a result of spring tides. Flooding of low-lying roads and footpaths is expected, which may exist for one to two hours either side of high tide. Flooding of properties is not expected.”

The alert is expected to be updated at 1pm on Saturday.

Much of England and Wales cloudy and much cooler than Friday with bursts of rain in some places, though the far south brighter and still very warm. Windy across Scotland and Northern Ireland with sunny spells and a few showers.

Outbreaks of rain, locally heavy with isolated thunder in the southeast, clearing from most southern parts. Cool and windy in the north with patchy rain for northern Scotland.

Further outbreaks of showery rain are possible across southern England; much cooler than recently here. Light showers in the north mostly dying out to leave broken cloud and sunny spells.

Often cloudy with spells of light rain/drizzle for northern areas after a cool and fine start to the period. Elsewhere, mainly dry with sunny spells. Rather warm for most.

Previous : Gunman, 70, held down by ‘hero’ after ‘killing three pensioners’ at church dinner
Next : US Open fan clutches his face on floor as Phil Mickelson hits spectator with stray ball