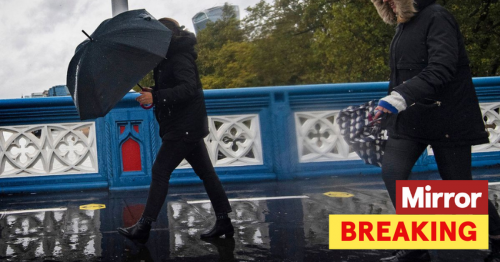 The UK could be battered by winds of up to 80mph in the coming days, forecasters have warned – as a yellow alert is issued.

The strongest breezes will arrive across northern Scotland during Friday afternoon, according to the Met Office, before developing further south through the evening across the rest of the country, Northern Ireland and some exposed coasts of northern England.

The location and strength of the very strongest winds remains uncertain, the weather service said.

But gusts seem likely to reach 50 to 60 mph widely – with 70 to 80 mph possible in coastal locations, particularly in parts of Scotland.

The Met Office warned that people across the UK should expect travel delays, as some roads and bridges could close.

There is also a slight chance of some damage to buildings, such as tiles blown from roofs, it said – and a possible loss of mobile phone coverage.

The warning, which begins at 12pm on Friday, ends at 6pm on Saturday.

The latest forecast comes as reports emerged stating that the UK is also set to freeze over the coming wee, as temperatures plunge.

Weather charts from meteorologists WXcharts shows heavy snow is predicted to move down Scotland towards northern England from Friday.

This is then expected to fall over higher ground on Saturday, before more snow strikes again on Monday, where it could fall as far south as London and the south east.

And temperatures are likely to plunge with most areas barely rising above zero degrees in the coming days, with the biting weather set to last right up to the weekend.

Meanwhile, forecasters also said the UK is facing a higher chance of a wetter winter in the next few months with households urged to be prepared for the risk of flooding.

The Met Office says there is an above-average chance of the winter being wetter than normal over the three months from November to January, with the wetter conditions most likely in January next year and beyond.

With the potential for more wet weather and impacts from rainfall and winds, the Environment Agency is urging people to check their flood risk online, sign up for flood warnings and, if they are at risk, know what to do if flooding hits their home.

A woman's umbrella is turned inside out by the wind
(

Sign up for our newsletter to keep up to date with all the essential information and changes at www.mirror.co.uk/email.

Stephen Dixon, from the Met Office, said temperatures will fall in Scotland and northern England, and then further south as the week progresses.

He told the Independent: "From Wednesday, highs will be around 9C, but lows overnight into Thursday will go down to -4 in rural Scotland."

Many places will see wintry showers of rain while snow is expected in Scotland and higher ground.

Similar conditions are expected on Thursday and Friday.

"Into Friday the theme continues: a cold start for most with overnight temperatures widely around freezing overnight and in rural areas down to minus two or three degrees," Mr Dixon said.

Windy conditions are expected on Friday and Saturday
(

Mostly dry and rather cloudy, although the odd light shower. Some cloud breaks are likely, giving occasional sunshine, most likely in the east and south. Still slightly chilly in the south after patchy frost and fog, nearer average further north.

Rainband continuing south, some sunnier breaks ahead of this, most southeastern areas of England dry. Further north, rain followed by sunshine and blustery showers, wintry on hills. Windy, gales later.

Cold and unsettled with showers and occasional longer spells of rain, some hill snow at times. Often windy, with potential for severe gales in the west on Friday and Saturday.

Previous : Tory MPs vote down plea to ban private health firms sitting on NHS boards
Next : How to de-ice your windscreen and de-mist it quickly as icy weather blasts UK