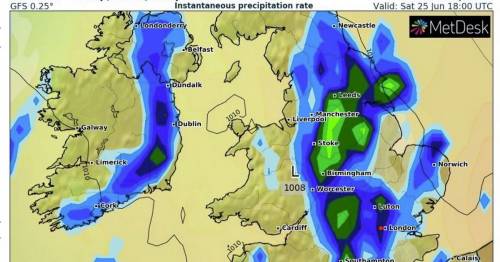 Music lovers heading to Glastonbury will be able to revel in sweltering 25C highs before rain, hail and thunder hit over the weekend.

The Met Office is predicting a mixed picture for the music festival that starts this week and while it won’t be a washout, it could get boggy with heavy showers most likely on Sunday.

Looking at the temperatures and they are expected to peak with 25C on Thursday and yet just three days later it could have fallen to 16C on Sunday.

The five-day music event, returning for the first time in three years, is expected to attract around 200,000 people per day to Worthy Farm in Pilton, Somerset, from Wednesday to Sunday.

Headline acts include Billie Eilish, Kendrick Lamar, The Petshop Boys and Sir Paul McCartney, while other well-known bands such as McFly and the Sugababes will also be taking to the various stages to mark the event's 50 year anniversary.

The fields that host the festival will be dotted with stages, tents, communal toilets and food stands, most of which will be outside. This means that when the showers hit there will wellies and raincoats will come in useful.

“Glastonbury is approaching but will it be a washout or will it be a heatwave? Hopefully neither but there will be some showers by the weekend and it will be warming up and increasingly sunny over the next few days,” said Met Office forecaster Aidan McGivern.

"We’ve got high pressure, a very large high in the mid Atlantic and that is extending in a ridge for much of the UK so for most it is actually increasingly sunny over the next few days.

" Weather fronts confined to northern parts of the UK and with that ridge of high pressure in charge and with some slightly warmer air coming our way, temperatures will rise day by day, peaking in fact on Thursday.

"But by Thursday there is the chance of some heavy showers emerging from the near Continent and then this feature arrives on Friday, that will bring a spell of more persistent rain later in the day and for the start of Saturday potentially.

"So a few hours of rainfall, late into the afternoon, into the evening for Glastonbury because of that front and it could extend another front of rain, perhaps some heavy rain in the early hours of Saturday.”

Low pressure is then sitting over the UK during the weekend making it unsettled.

It is unlikely to be a washout at Glastonbury this year
(

"Breezier conditions coming in from the north west, much cooler and a mixture on Saturday and Sunday of heavy showers, yes, with hail and thunder possible but also some sunny spells in between," Mr McGivern added.

Away from Glastonbury and for much of the UK it should again be hot over the coming days but there is cloud and rain for Scotland and Northern Ireland and it could cover parts of northern England as Tuesday progresses.

Fine and dry for most. Cloudier with drizzle in northwest. Today:

Another fine, dry day for most, with good sunshine for England and Wales where feeling warm or very warm. Cloudier in the north with a few afternoon showers over eastern Scotland and perhaps northeast England.

Mostly clear for England and Wales and chilly in parts of the far south and southeast. Cloudier in the north with a little drizzle for upslopes.

Fine and dry for much of England and Wales and east Scotland. Warm or very warm here. Staying cloudier in the northwest with a little light rain or drizzle.

Mostly dry on Thursday and warm, locally hot in the south. Turning unsettled on Friday and Saturday with showers, heavy locally thundery and some longer spells of rain. Becoming cooler.