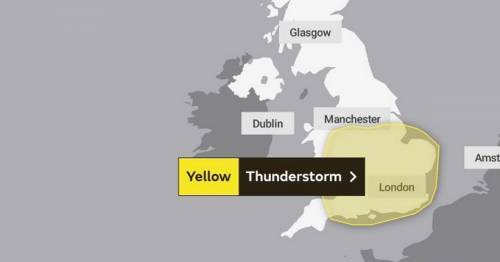 Music lovers could face heavy rain and even hailstone at Glastonbury today with a thunderstorm warning in place.

Brits have been enjoying several days of hot weather and it is likely to become more unsettled especially for the south of the UK.

The best of the temperatures are likely to be in the north of England today which should miss the worst of the rain and the mercury could rise as high as 30C, said the Met Office.

But for southern England there is a yellow weather warning for thunderstorms in place which runs from 10am until midnight.

The Met office states: “Thunderstorms and torrential downpours may cause travel disruption and, in a few places, flooding.”

It continued: "There is a small chance that homes and businesses could be flooded quickly, with damage to some buildings from floodwater, lightning strikes, hail or strong winds.

"There is a small chance of fast flowing or deep floodwater causing danger to life. Where flooding or lightning strikes occur, there is a chance of delays and some cancellations to train and bus services.

"Spray and sudden flooding could lead to difficult driving conditions and some road closure. There is a slight chance that power cuts could occur and other services to some homes and businesses could be lost. There is a small chance that some communities become cut off by flooded roads."

Revellers at Glastonbury may need wellies and raincoats
(

It is bad news for revellers who have been enjoying the sunny weather so far at Glastonbury and while heavy rain was predicted at the start of the week, it has happened quicker than expected.

The five-day music event, returning for the first time in three years, is expected to attract around 200,000 people per day to Worthy Farm in Pilton, Somerset, from Wednesday to Sunday.

Headline acts include Billie Eilish, Kendrick Lamar, The Petshop Boys and Sir Paul McCartney, while other well-known bands such as McFly and the Sugababes will also be taking to the various stages to mark the event's 50 year anniversary.

Wellies and raincoats will come in useful if the thunderstorms do hit with the likelihood "hit and miss".

Met Office forecaster Alex Deakin: "The likelihood of some thunderstorms breaking out, by no means everywhere seeing these downpours but we do have a Met Office yellow warning in place covering a large portion of England and Wales for these thunderstorms during the day.

"Not everywhere in this yellow area is going to see these downpours that is just the area where there is the risk, it is always going to be hit and miss, these kinds of summer showers but where we do see them it is going to drop a lot of rain in a short space of time, large hailstones, gusty winds and lightning will be an extra hazard as well."

Showers and thunderstorms for parts of England and Wales today. Today:

Fine and dry at first for most areas, many parts then seeing warm sunny periods. Showers and thunderstorms are likely to break out over parts of England and Wales this afternoon though, giving some heavy downpours.

Early evening showers and thunderstorms over parts of England and Wales will move northwards, becoming mostly confined to parts of eastern Scotland by dawn. Warmer than last night.

Sunny spells, but also some showers for many areas. Heaviest showers likely over Scotland, northern England and the far southwest. Breezy and cooler than today in the south and west.

Previous : Restaurant worker catches fire while cleaning as onlookers hold him up to sprinklers – World News
Next : Bank issues NHS text scam warning as man loses £1,000 – what to look out for