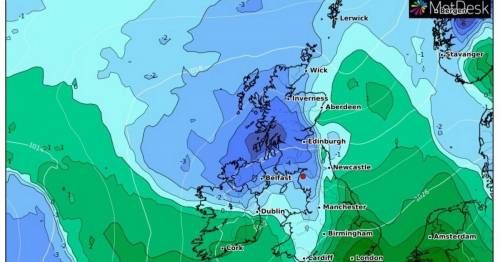 Brits are being warned of several days of freezing dense fog that will remain into the weekend where temperatures could get as low as -5C.

It is set to be bitterly cold in parts of the south of England where the fog could remain most of the day while it will be milder in the north.

The Met Office has issued a yellow warning of fog that spreads towards the south on Wednesday morning and could cause travel disruption.

It stated: "Dense fog patches likely to cause some travel disruption overnight and during Wednesday morning.

"What to expect: slower journey times with delays to bus and train services possible, there is a chance of delays or cancellations to flights."

The weather warning areas for Wednesday

The Met Office is predicting a bitingly cold start to Wednesday with temperatures having dipped to -5C in some areas.

Forecaster Aiden McGivern said: "Skies overnight are clearing once any drizzly rain is out of the way from the far south east by about midnight and then under those skies a few fog patches forming predominantly around river valleys and sheltered rural parts but certainly a widespread frost across central and southern parts of the UK.

"Temperatures in towns and cities not far from zero but in rural parts I think -4C and -5C possible."

During Wednesday there are expected to be brighter skies in the north of England and Scotland but there could be "near gale force" winds on the northern coastline of the UK.

It is a similar weather pattern going into Thursday morning with a north-south divide.

"Clear skies and chilly in the south with fog patches and temperatures in some parts a few degrees below zero," said Mr McGivern.

Fog remains a threat for the rest of the week and then the Met Office is predicting unsettled conditions for the South West, reported BristolLive.

Maps from WXCharts indicates that a covering of snow could fall in Devon, Cornwall, and Somerset from Tuesday, January 18.

A the same time wintry showers could also hit parts of Wales, Scotland, the North East, and London early next week.

In its long-range forecast for January 16-25, the Met Office says: "Initially some brighter conditions to be seen once low cloud and patchy fog clear, before becoming increasingly less settled, particularly in the north, as frontal systems arrive from the Atlantic.

"Drier and more settled conditions persist for longer in the south with light winds and clear skies leading to overnight frost and fog, which may be slow to clear through the morning.

The cold weather and fog could remain over the weekend

"Towards the middle of this period there remains a possibility that low pressure could move east, bringing strong winds and cold wintry showers to windward coasts.

"Temperatures are most likely to be slightly above average in the north whilst remaining near normal towards the south, with a low likelihood of a short-lived colder spell."

Plenty of fine and sunny weather for much of England and Wales, though fog slow to clear in places. Scotland, Northern Ireland and northwest England cloudier and breezier. Some rain at times in northwest Scotland and the Northern Isles.

Another fine day for many over England and Wales, though fog again slow to clear in places u0096 cold where this happens. Staying cloudier and windier further N.

Outlook for Friday to Sunday:

Settled albeit rather cloudy, with sporadic rain in the west at times. Foggy, especially in the south, persisting all day in places. Rather cold, with overnight frosts for some.