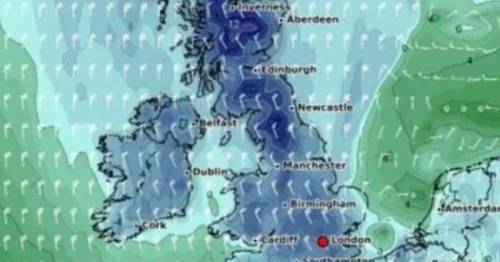 Parts of Britain are bracing for a blast of snow as severe gales threaten to cause widespread travel disruption this weekend.

Snow is expected on higher ground in Scotland on Wednesday but cold weather will spread to lower levels on Thursday thanks to an Arctic chill sweeping in after a very mild November so far.

Hill snow is expected on Friday and Saturday as things become unsettled, and it will be accompanied by "very strong winds, gales or severe gales".

Gales of up to 80mph will likely cause severe travel disruption up and down the country.

Many places could see rain, sleet or a mix, and more snow is in the Met Office's forecast for higher ground on Sunday and Monday.

A yellow warning for wind has been issued for Scotland, Northern Ireland and parts of northern England for much of Friday.

On Saturday, the warning will extend to most of the UK, except London and the south-east.

The Met Office has told Brits to prepare for damage to buildings such as tiles being blown from roofs, travel delays and power cuts.

It said: "The strongest winds will arrive across northern Scotland during Friday afternoon, before becoming more widespread overnight and into Saturday morning.

"Winds will tend to slowly ease from the north during the afternoon. The location and strength of the very strongest winds remains uncertain.

"However, gusts seem likely to reach 50 to 60mph widely, with 70 to 80mph possible in coastal locations, particularly in parts of Scotland and north-east England."

The Met Office said some hill snow will be "accompanied by very strong winds, gales or severe gales possible" on Friday and Saturday.

Severe gales and colder air are expected this week
(

"In terms of snow, it's challenging to forecast even just a few days ahead, with often marginal conditions across the UK.

"Friday and Saturday look much more unsettled, with a mix of rain, sleet and snow. Where snow does fall, it is likely to be transient and confined to higher ground."

Overnight temperatures are likely to fall below zero in the north. They could plunge to -7C, the Express reported.

Met Office meteorologist Ollie Claydon said: “Overnight on Friday we could see snow on some wider areas of high ground across the UK, so across the Pennines and Welsh mountains.

“At the moment it is not looking likely that any of it will settle necessarily.

“With the rain around as well it could quite readily turn back to rain. It’s not looking like anything is going to necessarily settle elsewhere away from the Scottish mountains."

Many southern areas rather cloudy but dry, after any fog clears; odd spots of drizzle in places but some sunnier breaks too.

Rain in the northwest will move gradually south, followed by windier, colder weather with sunshine and blustery showers.

Rain moving south on Friday followed by showers which will be wintry at times and continue through Saturday.