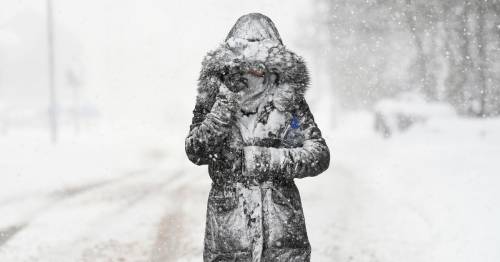 The UK is set to get snow this week as an Arctic plunge sends the mercury down this week.

Forecasters have warned temperatures will plummet to -2C due to an arctic blast.

Met Office experts predict some regions will see the white stuff before the end of the week as most regions struggle to stay above freezing point.

The north will be hit hardest where the "heavy and wintry showers" will fall.

Frost is also expected to cover cars and pavements across the north, and other regions, as the week continues.

Most of England will also feel the chill as temperatures across the nation drop. Some areas will feel the freeze more, like in Wales where an icy -2C is expected.

It will remain bright and sunny for most places, but that sunshine will not indicate warmth.

“It turns much colder from the north later in the weekend. From Sunday, rain is likely in the North, with some snow across higher ground, possibly reaching low levels at times.

“Further south looks to have fewer showers, but with a slight chance of wintry weather, and chilly nights with frost in places.”

A Met Office spokesman told the Mirror that deep snow will cover the mountain tops of Scotland on Wednesday before slowly moving southwards over the course of the week.

He said: "This snow will build in for the high ground of Scotland from Wednesday, and will likely persist in high areas through to the weekend.

Temperatures will continue to plummet this week
(

"Coupled with this will be some gusty winds on Wednesday with up to 50knot gusts possible in the far north.

"That windy theme will persist for the northwest in particular later in the week and into the weekend."

BBC Weather forecaster Sarah Keith-Lucas said that weather conditions will change over the next few days.

Previous : Boris Johnson loses his place and rambles about Peppa Pig in bizarre business speech
Next : ‘We are losing sight of the fight against racism by digging up old dirt on Azeem Rafiq’ – Darren Lewis