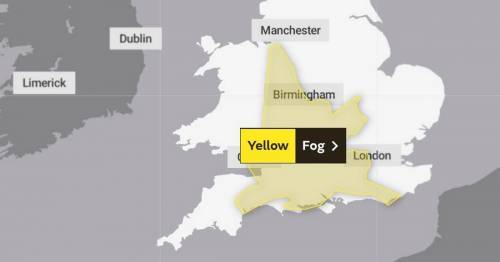 Brits are being warned of widespread fog and freezing temperatures as low as -4C that is set to cause dangerous travel conditions.

This week there has been a split in the weather with some bright skies and mild temperatures reaching the mid-teens in Scotland while the south of England has been bitterly cold and people waking up to plenty of fog.

The Met Office has issued a warning for fog on Friday for much of England and Wales while there are also alerts for very high pollution levels in London and the South East.

Met Office forecaster Clare Nasir said: "Warnings of dense fog into Friday morning causing problems on the roads and it is likely to persist through the morning across one or two prone spots.”

The fog warning by the Met Office covers much of England

Similarly BBC forecaster Tomasz Schafernaker warned: "For some of us it is going to be a very foggy start to Friday, if you are planning to travel through the morning take it steady particularly across parts of Wales, central and southern England.”

The Met Office warning says people should expect: “Slower journey times with delays to bus and trains services possible. There is a chance of delays or cancellations to flights.”

The warning, which is in place until 11am, said visibility could be reduced to less than 100m, making it dangerous for drivers on the roads.

Ms Nasir added: “That fog will reform and become quite widespread especially across east Wales and the central part of England.

"Some pockets of frost and fog also for Northern Ireland but fairly widespread frost anywhere from the southern part of Yorkshire southwards so a cold start to the day come Friday morning and that fog will be a problem through morning rush hour.”

The temperatures could drop as low as -4C in southern England
(

It is high pressure over the south of the UK that is causing the foggy conditions and the cold temperatures.

“Quite a temperature difference across the UK and in fact the breeze is just about coming off the Atlantic across Scotland and so frost free here and frost free across Northern Ireland," said Tomasz Schafernaker.

"The frost will be across the southern part of England and Wales where it will be -4C in one or two parts. It is here where the fog is going to be forming in the centre of this high pressure and some of this fog will linger into the afternoon."

He added: "The problem with the high pressure and the windless conditions particularly in London and the South East will be the pollution that’s what happens sometimes when you have these very stable conditions with the light winds and the pollutants get trapped in the atmosphere in urban areas and we get some very high levels."

During the day brighter spells are expected to emerge especially in northern England and Scotland, in particular, but not as mild as it has been north of the border.

Fog patches across England and Wales persisting in some places, though mostly clearing to allow plenty of sunshine. Temperatures close to average, though cold where fog remains. Cloudier across Northern Ireland and Scotland, some light rain in the far north.

Clear skies across England and Wales allowing frost and some freezing fog patches to develop, especially across central and eastern parts. Cloudier and milder further north and west, some drizzle.

Chilly across eastern England with fog and low cloud slow to lift. Most parts dry but rather cloudy with only brief bright spells. A few light showers in the west.

Widely settled on Sunday, cloudy at first, but becoming sunny from the north. Monday and Tuesday, dry and bright after early fog patches clear.