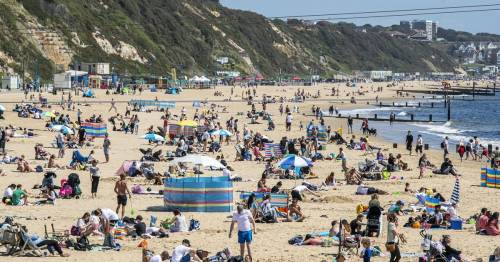 Brits are set to bask in the warmest spell of the year so far with temperatures set to rise to 27C in parts of the UK this week according to the Met Office.

Warm air from North Africa will set the mercury rising in most parts of the country, but a series of low pressure systems will unfortunately lower our prospects of a lengthy heatwave

There is a slim possibility that we could see the hottest day in May on record – that currently remains at 27.8C – recorded in Camden, North London in 1925.

Tuesday is likely to the be the warmest day of the week, according to forecasters, who also warned of showers across the north and west.

Today's forecast will see hot weather across the country

There is the potential for thunder in parts of Scotland, and central England as low pressure increasingly dominates, pushing the high pressure eastwards.

Met Office chief meteorologist Andy Page said: "The plume of warm air we have been expecting from the south will bring higher temperatures across the whole country over the next week.

"However, it looks like the effects from the Atlantic lows will prevent sustained high pressure building from the east.

"This means that while we might see some warm – and in places very warm – days, overall the next week will feel more like what we would expect of a warm spell in May, with some heavy showers around, rather than hot summery weather."

Met Office spokesman Richard Miles added: "At the moment Tuesday looks like being the warmest day of the week".

A good deal of dry weather with variable cloud and sunny spells. However, clusters of showers moving north through the day, some heavy in places. Becoming warm and humid in the south.

Further bands of showers merging into longer spells of rain, heavy in places, as they move north. Chance of thunderstorms with hail across southern and some central areas.

Very warm, especially in the southeast on Tuesday although some rain possibly in the west. Mixture of sunny spells but also heavy showers or thunderstorms thereafter, particularly in the south.