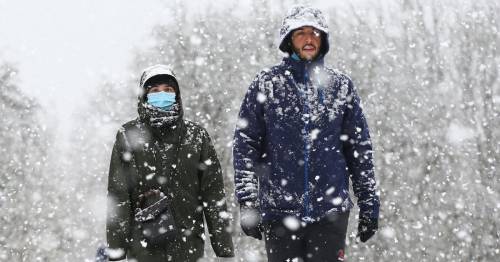 Temperatures are set to plunge and stormy weather is set to sweep across the UK as a mild autumn comes to a miserable end.

Forecasters say rain and strong winds are expected to hit the country in the coming days, with a wet weekend on tap and snow possibly just days away.

A cold front is due to sweep south with lower temperatures during the day and some overnight frosts.

Forecasters have said snow could fall for the first time this season in less than a fortnight, though it will likely be confined to higher ground where temperatures are lower.

Aidan McGivern of the Met Office said an area of low pressure is moving in and it will bring grimmer skies.

He told the Sun: "Through the day on Saturday, many places will turn cloudier again and there'll be a few spots of rain.

"By the end of Saturday, some wet weather pushes into Northern Ireland and Western Scotland.

"That then crosses the country."

A new "low" will get "ever closer" after that, with strong winds expected and heavy rain possiblle in western parts of the UK.

Forecasters have warned that a freezing polar vortex could hit within weeks, bringing colder weather and snow.

Some forecasts have suggested snow in parts of Wales and Scotland on October 24.

Meanwhile, a fog warning for Cornwall, Devon, Somerset and Dorset was due to expire at 10am on Thursday.

The Met Office warned: "Fog patches may be dense in places to begin with today with visibility dropping below 100 metres at times and perhaps below 50 metres in a few places.

"Much of the fog will be found away from hills and moors.

"Most of this fog will lift and clear by mid-morning, but a few stubborn patches may linger until late morning."

Cold in the north.

Otherwise, dry with sunny periods and cooler than today in the north.

After a cold start for many turning widely milder, windier and unsettled.

Rain mainly affecting the north and west over the weekend, then much of the UK on Monday.