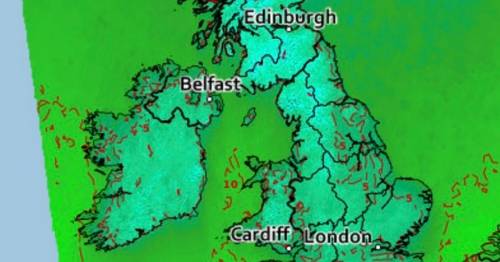 A 10-day chill has begun as Brits are set to freeze this week in a -2C Arctic plunge.

Brits are waking up today with a noticeable drop in temperature as the mercury will struggle to reach double digits in many places.

The Arctic weather front is bringing freezing cold across the UK, starting in Scotland before pushing its way down.

Overnight, temperatures in parts of Scotland will dip to -2C as forecasters warn of widespread frost.

Throughout the week, the freezing temperatures will push their way towards Wales and parts of the South as winter looks to be arriving early this year.

The chilly temperature drop us due to a 900 mile wide blast of Arctic air, with forecasters warning now is the time to break out those warm winter coats.

According to the BBC's month long forecast: "A surge of colder Icelandic air will spill across the UK over the final ten days of November and linger into the first few days of December.

"The most prominent drivers of this pattern will be high pressure in the Atlantic and a trough over Continental Europe."

BBC Weather forecaster Sarah Keith-Lucas said that weather conditions will change over the next few days.

“It turns much colder from the north later in the weekend. From Sunday, rain is likely in the North, with some snow across the higher ground, possibly reaching low levels at times.

“Further south looks to have fewer showers, but with a slight chance of wintry weather, and chilly nights with frost in places.”

And with December fast approaching it could be getting even colder soon.

It continues: "As the period continues winds will be typically from the north and northwest allowing cold conditions to persist.

"High pressure is likely to sit to the south or southwest of the UK, bringing possible rain and showers to the north, wintry on high ground and perhaps at lower levels at times.

"Likely drier in the south, often largely settled with clear/sunny spells. Rather cold at times, with overnight frost likely."

Dry with sunny spells for many inland areas. Showers affecting north-facing coasts, especially in the east where they will be frequent with hail in places, reaching some central parts of England later. Feeling cold in brisk northerly winds.

Showers becoming mostly confined to the far southeast of England. Clear skies for many, with widespread frost across central and northern parts. Turning cloudy, damp and milder across northern Scotland.

Many parts dry with plenty of sunshine, though showers still affecting the far southeast. Cloudy across northern Scotland with a little rain. Feeling rather cold, especially in the breezy south.

Outlook for Tuesday to Thursday:

Many places dry on Tuesday with the best of the sunshine in the south. Turning increasingly unsettled from the northwest midweek with some rain moving slowly southeast. Feeling rather cold.