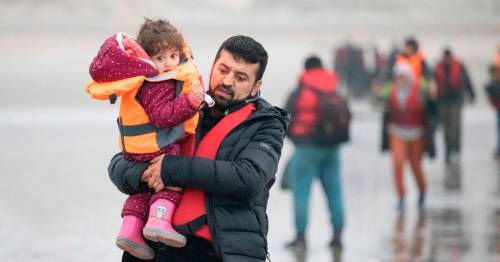 Just 1,171 desperate refugees have been placed in the UK through government 'resettlement' schemes since Covid hit – despite ministers pledging to help around 5,000 a year.

The data appears to undermine top Tories’ insistence that asylum seekers should only use “safe and legal” routes to get to the UK, not dangerous small boats from France.

After 27 people died trying to cross the Channel yesterday, Immigration Minister Kevin Foster highlighted the schemes as a way of helping people legitimately.

He said: “What we want to do is focus our efforts on the most vulnerable in the regions concerned, rather than those who would prefer to claim asylum in the UK rather than the country they’ve reached.”

Resettlement schemes were paused between March and December 2020 due to the Covid pandemic, only for another UK lockdown to hit just after they resumed.

Top Tories insist asylum seekers should only use “safe and legal” routes to get to the UK, not dangerous small boats from France, like the one pictured
(

Of those, 770 were relocated through the new UK Resettlement Scheme (UKRS), which launched in March this year after being delayed by Covid.

When the UKRS launched in 2019, the government said “the UK plans to resettle in the region of 5,000 of the world’s most vulnerable refugees in the first year of the new scheme”.

The figures do not include the huge Operation Pitting evacuation from Afghanistan as the Taliban took over in the summer.

Separately, Tory ministers promised an Afghan Citizens’ Resettlement Scheme, which in its first year would help around 5,000 Afghans who could not escape in time. But a minister this week said they were still working urgently to design the ACRS.

Before Covid hit, the resettlement policies were helping around 5,000 people per year.

Shadow Home Secretary Nick Thomas-Symonds said: “The Home Secretary has spoken of her commitment to safe and legal routes but, once again, this shows her actions do not match her words.

“Today’s statistics show the Government has – woefully – fallen short with only just over 1,000 having been resettled this year. At the same time, the Government closed down the Dubs Scheme having helped only 480 children when it was meant to help 3,000, and has still not set out how the Afghanistan Resettlement Scheme will work.

“Having properly-managed safe and legal routes is essential to tackling the vile people-smuggling gangs – urgent action is needed.”

It came as official figures revealed overall net migration to the UK has also dramatically dropped.

Net migration in 2020 for EU nationals was negative, with 94,000 more estimated to have left the UK than to have arrived post-Brexit.