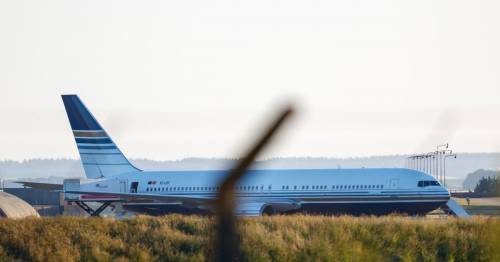 Work and Pensions Secretary Therese Coffey said ministers were already preparing for the next flight – but she was unable to say when it would take place.

The first plane carrying asylum seekers to Rwanda was grounded after a bombshell intervention from European judges just before it was scheduled to take off.

It came after a day of protests from activists, charities, and religious leaders, who have branded the plan immoral and cruel.

The injunction has infuriated ministers and sparked Tory calls to leave the European Convention on Human Rights (ECHR).

But Ms Coffey sought to downplay hints the Government was looking withdrawing from the convention – something hinted at by the Prime Minister on Tuesday.

"Right now I am not aware of any decisions or even hints about that," she told Sky News.

"The most important thing is that we tackle this issue right now. We will go back, I am sure, to the ECHR to challenge this initial ruling."

The Cabinet Minister said the Government was "surprised and disappointed" by the ruling.

"The Government is disappointed by the decision. I have never known such a quick decision made by somebody at the ECHR. I think the public will be surprised at European judges overruling British judges," she told Sky News.

"Nevertheless I know the Home Office is already getting ready for the next flight and we will to continue to prepare and try and overturn any future legal challenges as well."

Asked if how confident she was the next flight would be able to go ahead, she said: "I am highly confident.

Protesters at the perimeter of MoD Boscombe Down, near Salisbury
(

"This decision was taken at rapid pace yesterday. As a consequence it is right that the Government continues to try and make sure we deter unsafe, illegal routes of trying to enter the country because the only people who benefit are unscrupulous people traffickers, often trying to put people into modern slavery as well."

She refused to say when the next flight would take place, saying she was “not going to get into operational discussions”.

He told Sky News: "Look, this is a mess that Priti Patel created, she was told that the system was unworkable, unethical, and would cost an extraordinary amount of money.

"So she was warned about this. And of course, we're now in this situation."