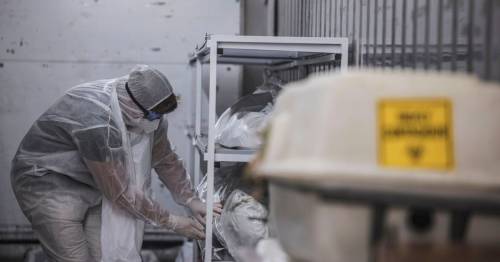 The new Covid variant will “almost certainly” make vaccines less effective and is the most “complex” and “worrying” seen yet, top scientists have warned.

The B.1.1.529 variant has only been detected in relatively small numbers in South Africa, Botswana and Hong Kong so far, but has caused alarm in Britain and abroad. This morning it was revealed there are suspected cases in Belgium.

Scientists are concerned by the variant’s high number of mutations which could help it evade the body's immune response and make it more transmissible.

He added: "It has mutations consistent with the Delta variant, which does spread more quickly, but transmissibility and spread is not just as simple as this amino acid does this or this does that, it's more like a team on things.

Are you rushing to get back to the UK before the latest changes take place? Email webnews@mirror.co.uk .

"So you can sometimes have the mutations all together but they won't be effective as a team.

"It looks like it spreads more quickly but we do not know that."

Also on the programme, Dr Susan Hopkins, chief medical adviser at the UK Health Security Agency, said: "The first look at it shows it has a variety of different mutations, it's got 30 different mutations that seem relevant, that's double what we had in Delta.

"And if you look at those mutations as mutations that increase infectivity, mutations that evades the immune response, both from vaccines and natural immunity, mutations that cause increased transmissibility, it's a highly complex mutation, there's new ones we haven't seen before, so we don't know how they're going to interact in common.

"So all of this makes it a pretty complex, challenging variant and I think we will need to learn a lot more about it before we can say for definite it's definitely the most complex variant before."

She added: "It is the most worrying we've seen."

Whilst both scientists raised the alarm over the variant, they disagreed on what conclusions they could draw already from it, highlighting the need for more data and research on it.

This comes amid warnings from government advisers that a new lockdown is possible.

Professor Adam Finn, a member of the Joint Committee on Vaccination and Immunisation (JCVI), has said that Britain "needs to be ready" for the possibility of new restrictions in light of the new variant.

He told ITV's Good Morning Britain: “On the one hand, I don’t want to induce unnecessary anxiety in people, but on the other hand, I think we all need to be ready for the possibility of a change in the restrictions."

“We now need to wait and see just what kind of threat this new variant may pose. If we’re lucky, it won’t be a serious one, but it could be very serious.”

The new variant has 30 different mutations, double the number the Delta variant had
(

Prof Finn said sequencing is being carried out around the UK to determine if any cases have already been imported.

Transport secretary Grant Shapps said the travel ban was“about buying time” so that scientists had time to establish how well vaccines and other Covid treatments work against it.

“It is inevitable of course that it will go around the world if it is going to do so,” he told BBC Radio 4’s Today programme, adding that the new travel rules would not “prevent it from coming here.”

There have been nearly 100 confirmed cases in South Africa, but the country’s health minister believes there are many more due to a surge in cases in Gauteng province.

Get the information that matters

With so much changing so quickly, keep on top of what is happening with the Mirror's news updates by email.

Delivered straight to your inbox, our daily coronavirus briefing will keep you informed of what is happening with Covid, lockdown, the vaccination rollout and the impact on how we live. Sign up here.

No cases have been identified in the UK yet but hundreds of people who have recently travelled from South Africa are being contacted and asked to take a PCR test.

This comes after the UK banned flights from six African countries including South Africa.

The temporary ban, which was announced Thursday and will come into force at midnight on Friday, included: South Africa, Botswana, Lesotho, Eswatini, Zimbabwe and Namibia.

South Africa has said that the British ban “seems to have been rushed” as the World Health Organisation has yet to advise on the next steps.

Naledi Pandor, South African Foreign Minister, said in a statement: "Our immediate concern is the damage that this decision will cause to both the tourism industries and businesses of both countries.”

It added that South Africa will try to engage with British authorities to get them to reconsider the decision.

The country had previously been experiencing a lull in Covid cases after a third wave until last week, when infection numbers began to pick up.

Although the NICD did not link the resurgence to the new variant, local scientists admitted it is the suspected cause.