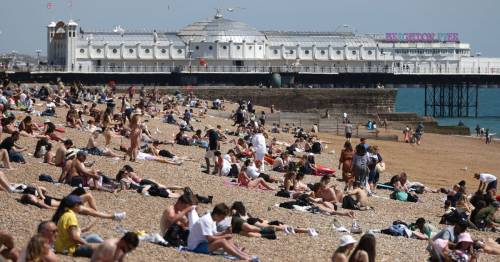 UK heatwave health warning: ‘Let’s not wait for people to die’ as mercury rises to 34C

Brits hoping to bask in temperatures up to 34C at the end of this week should take the heatwave "seriously", experts have warned as they urge "not to wait for people to die".

Forecasters expect 29C temperatures in London today, surpassing the 28.2C recorded at Kew Gardens, in the south-west of the capital on Wednesday, which was the hottest day of the year.

The South East will then sizzle on Friday as the mercury rises to 34C, with 27C-30C expected across most of England and Wales, meaning the country will be hotter than parts of Jamaica and the Maldives.

But climate experts have warned sunseekers of the dangers surrounding the hot weather, saying "thousands of people already die" due to excess heat in the UK.

A map issued by the Met Office showing temperatures on Friday
(

The UK Health Security Agency (UKHSA) has also issued a level 2 heat-health alert for a large part of southern and central England, with a level 1 alert in place for northern England.

Hannah Cloke, a hydrology professor at the University of Reading, said: "Despite the official warnings, some people still underestimate the effects of heat and don't change their plans to take it into account.

"We need to consider how people react to the current warnings, and continue to improve them. A warning system that people ignore is next to useless.

"Thousands of people already die due to excess heat in the UK, and climate change will only make heatwaves more frequent and more extreme in the future.

"Let's not wait for people to die before we take heatwaves seriously."

Before Wednesday, this year's hottest day so far was the 27.5C set in mid-May at Heathrow.

Dr Radhika Khosla, of the University of Oxford, said: "The health implications of rising temperatures in the UK are serious.

"Important physiological changes occur in response to high temperatures including changes in our circulatory, nervous and respiratory systems.

"When these adaptive measures are not enough, the risk of cardiopulmonary and cardiovascular problems increases among older adults, young children, people with chronic conditions, athletes and outdoor workers.

On Thursday, there will be patchy rain in parts of Scotland and Northern Ireland which will turn heavier for western Scotland in the evening, according to the Met Office.

The highest temperature Scotland can expect in the afternoon will be 22C, while Northern Ireland will struggle to get above 19C.

On Thursday, Wales will potentially see highs of 24C.

Jason Kelly, deputy chief meteorologist at the Met Office said the "unusual" weather means temperatures are expected to be in the high teens or even low twenties overnight.

Dr Vikki Thompson, climate scientist at the University of Bristol Cabot Institute for the Environment, said: "Heatwaves are one of the most deadly natural hazards, in the UK 3,000 deaths were linked to heatwaves in 2021.

"The health issues related to heat include direct effects, such as heat stroke and cardiovascular failure, and indirect effects including poorer mental health and an increase in accidents such as car crashes and drownings."

Dr Mark McCarthy, head of the Met Office National Climate Information Centre, added: "Reaching 34C during June is a rare, but not unprecedented, event in the historical climate records for the UK.

"But if it should happen this week it would be notable that it would have occurred on three days during the last six Junes."

Previous : Covid on the rise as hospitalisations climb 30% in a week – but where are the hotspots?
Next : Dog owners urged to put their pet’s bowl in freezer as heatwave comes to UK