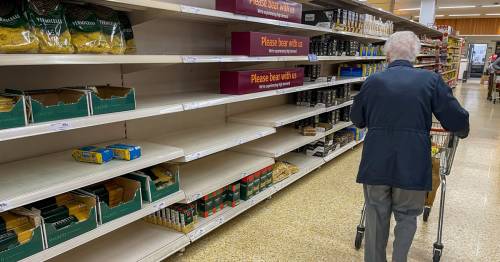 Pasta prices are up 50% in a year, as worrying new research shows how the cost of living crisis is hitting people already trying to save money on shopping.

Households are already grappling with huge increases to the price of energy and fuels like petrol and diesel.

But now official new data shows that even households trying to cut back on their grocery bills face soaring prices.

For example, the price of dried pasta rose by 50% between April 2021 and 2022, according to the Office for National Statistics (ONS).

The typical 500g bag of pasta now costs 53p, rather than 36p one year ago – horrifying news for people on low incomes.

There have been some stark price rises

Overall a basket of 30 'cheap' foods and drinks rose 6% in a year, the ONS said.

The cost of some traditionally cheap foods did not change much, like instant coffee, milk, sugar and bananas. All rose in price by just 1%.

But alhough food prices are rising overall, some selected items are actually falling.

The ONS is best-known for measuring price rises across all sectors and publishing inflation figures.

But due to the cost of living crisis the statistics organisation has homed in on one area – cheap food.

The ONS has made an experimental list of 30 cheap staple foods, then looked at each supermarket's website to find the cheapest option every month.

It then tracked these prices over a year to see how these changed.

Brits are paying more for food mostly because of rising costs being passed on and the war in Ukraine .

Farmers and shops are facing higher bills for energy and fuel, which consumers end up footing the bill for.

The Russian invasion of Ukraine has also led to higher food prices.

Russia and Ukraine produce 80% of the world's sunflower oil and 30% of its wheat, leading to prices rising.

But the two countries also produce huge amounts of fertiliser, which is now being disrupted.

Lack of fertiliser means farmers paying more for it, and that cost being passed on to shoppers at supermarket tills.

Earlier this month The Mirror reported UK inflation has surged to its highest level in 40 years.

The consumer prices index (CPI) measure of inflation rose to 9% in the 12 months to April, the ONS said.

This is up from 7% in the previous month and the highest inflation has been since 1982. The Bank of England and Chancellor Rishi Sunak have predicted that CPI could rise above 10% this year.

M&S chairman, Archie Norman, said that food prices could soar by as much as 10%.