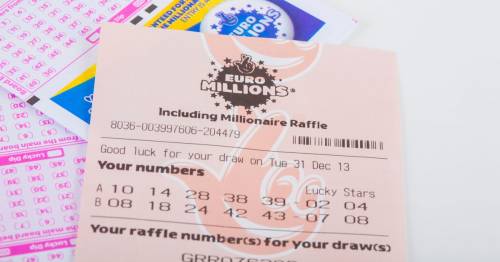 The winner of a £184million EuroMillions jackpot has stepped forward to claim their record-breaking prize.

The lucky UK ticket-holder matched all of the winning numbers in Tuesday's EuroMillions draw.

It is Britain's biggest National Lottery prize yet, making the winner instantly richer than the likes of Adele and Anthony Joshua.

Camelot’s Andy Carter, Senior Winners’ Advisor at The National Lottery, said, “This is absolutely incredible news! Last night saw history made with the biggest ever National Lottery prize won by a single UK ticket-holder, and we’re ecstatic that we’ve now received a claim.

"Our focus now is on supporting the ticket-holder through the process and helping them start to enjoy their truly life-changing and record-breaking win.”

This is the second EuroMillions jackpot won in the UK this year – with the £109million being scooped up in February.

In 2021, five UK ticket-holders banked an incredible EuroMillions jackpot win including one who bagged an amazing £122.5million jackpot prize in April and another who won a £111million jackpot in June.

The claim will now go through the necessary checks before the life-changing sum can be issued.

Once it has been paid out, the lucky ticket-holder can decide if they want to go public.

Colin and Chris Weir, from Largs in Ayrshire, Scotland, are the UK's biggest winners to have gone public.

Another winner, who became similarly stinking rich on the Euromillions, landed in hot water with her husband for obliterating her charity donations budget.

Frances Connolly, 55, from Hartlepool in Co Durham, won £115million but has already given away half on charitable causes.