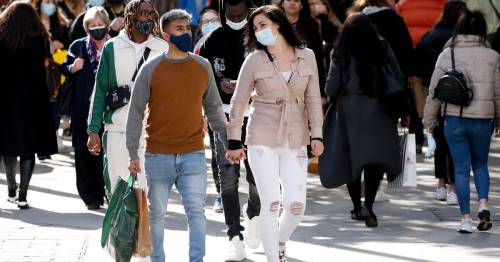 UK Covid daily cases highest for three months as infections soar by over 45,000

The UK's daily coronavirus case count is at its highest for three months, new figures show.

The figures, released this afternoon by the Department of Health, show 45,066 new infections in the last 24 hour period – the highest since July 20.

Deaths have also risen by 157 – a 22 percent increase on last Thursday.

In comparison, this time last week new reported virus cases stood at 40,701 and fatalities within 28 days of a positive test were 122.

Meanwhile, yesterday's figures were also at the highest level for 12 weeks but today saw 2,290 more recorded, suggesting transmission rates are still very much a growing concern.

The daily death daily is yet to flatten in the UK
(

However, the death toll of 136 showed a marginal decrease on the previous Wednesday's 143.

As reported earlier today, one in six of all Covid cases recorded in the UK have come since 'Freedom Day' three months ago.

Analysis of coronavirus infections and deaths since July 19, when restrictions designed to stop the disease's spread were lifted, shows the damage still being done by the virus.

Anna Garside, 28, receives her second coronavirus vaccination at a vaccine centre in Birmingham
(

More than 2.8 million people have tested positive for Covid, a sixth of all UK cases since the pandemic began.

Despite the remarkable effectiveness of the vaccine, 9,397 people have lost their lives to the disease since lockdown was axed.

That is the equivalent of more than 100 a day.

The UK is now the hardest hit country in Europe in terms of daily infections, logging 10,000 a day more than Russia despite having less than half the number of people.

Separate data from the ZOE CoVID study suggest there are as many as 69,000 daily cases, with 1 in 69 Brits showing symptoms.

As a result, experts believe the third wave has now reached its peak.

Further research found that in the double vaccinated population there are an estimated 18,817 new daily symptomatic cases.

Professor Tim Spector, lead scientist on the ZOE COVID Study app, comments on the latest data: " The UK seems to be slowly waking up to the fact that COVID cases are too high, but the reality is they’ve been soaring for months and many countries have put us on their red list.

"Infections remain high in young people, and look to be spilling over into the 35-55 year olds. If these increases creep into the over 55s it could spell disaster for the NHS this winter."

Previous : Migrants face tough conditions in Libyan detention after crackdown
Next : Nurse ‘let out scream’ being knocked from bike before bin lorry killed her