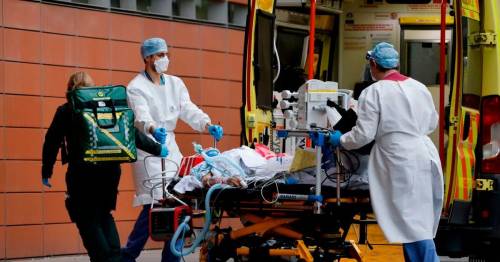 UK Covid daily cases above 50,000 for second day in a row as Omicron spreads

New cases of Covid in the UK have surged over the 50,000 mark for the second day in a row as concerns grow about the Omicron variant.

Department of Health data released today shows there have been 50,584 infections in the UK in the past 24 hours. There have also been 143 deaths.

Yesterday, cases surged over the 50,000 mark for the second time in two weeks when 53,945 infections were reported.

The previous surge was seen last Friday, when 50,091 cases were logged – the highest daily count in over a month. It was paired with a grim tally of 160 deaths.

Over 170 areas of the UK are seeing a week-on-week increase in the number of Covid cases, according to official figures.

Figures revealed that Torridge in Devon had become the country's worst Covid hotspot. The southwestern region was followed closely by Gwynedd in Wales and Mid Sussex.

Southern England, Wales and Northern Ireland are recording the highest rate of infections, the figures show.

Some encouraging data suggests more than half of local authority areas are witnessing a drop in new infections.

Fears about the Omicron variant grew today as ten more cases of the vaccine-resistant mutation were logged in Britain.

The B. 1. 1.529 variant, known as Omicron, was first identified in southern Africa, but has since been reported in at least 19 other countries but is expected to be far more widespread.

Cases in the UK have been found from Glasgow, to Liverpool, Norfolk and London as the government works to try and keep the new variant from spilling out of control.

Yesterday, worrying graphics of the variant emerged showing just how different it is from the Covid virus.

Illustrations released by the Genomics UK Consortium (COG-UK) show that it has a worrying 32 mutations on its spike protein.

By comparison Delta – which tore through the population last winter and has since become the world's dominant strain – has seven.

Experts have said Omicron, which was first identified by scientists in South Africa, is the most mutated Covid variant they have yet encountered.

Yesterday morning a spokesman for the UK Health Security Agency told The Mirror that targeted testing is being carried out for the variant.

Previous : Face mask fines: What happens if you don’t wear a mask in mandatory areas?
Next : Ralf Rangnick’s cryptic response to £100m Man Utd budget as he namechecks four players