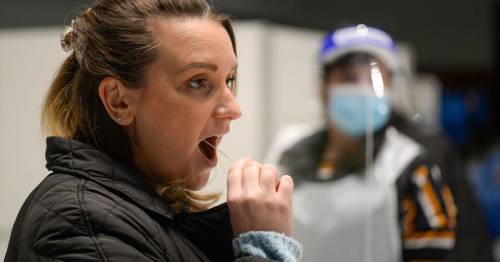 The UK's Covid cases have reached 10 million as daily recorded infections hit the highest number in over a month with 47,240.

The last time the daily figure was so high was on October 22, when 49,298 cases were recorded.

And not since the middle of September have daily infections dipped below 30,000 – with today's number showing a slight 0.9 percent increase on last Thursday.

The data released this afternoon by the Department of Health also shows the death toll has risen by 147 in the latest 24 hour period.

It is a slight drop on Tuesday and Wednesday this week, and, more encouragingly, is 26 percent lower than this time last week.

Meanwhile, hospital admissions also showed a positive drop, with the most up to date daily count showing 745 patients – an 11.4 percent fall compared to the last seven days.

It comes as a government scientific adviser has today called for Downing Street to introduce 'Covid health certificates' for pubs to show how likely infections are to be passed between punters.

The daily Covid case count is the highest since October

SAGE member Professor Stephen Reicher said it's much more important for those in charge to provide clear information on how well ventilated spaces are, rather than placing the responsibility on customers and business owners.

Earlier this week, official Covid guidance on testing and prevention was updated, warning people that they are more likely to catch Covid or pass it on if they are in crowded spaces or where there is "limited fresh air".

Meanwhile, in other related news, jetting off to European tourist destinations may be out of the question for British holidaymakers yet to have their booster jab, under new guidelines being set by the EU.

After the European Union’s health agency recommended boosters for all, it is expected to reveal new Covid-19 travel guidelines based on vaccination status, rather than country of origin.

The new guidance will determine how long vaccinations should remain valid and give its recipients the subsequent freedoms to travel and enter venues.

Some EU member states, such as France, have already set an expiration date on vaccine certificates.

France has announced that after December 15, people over 65 will be allowed to enter restaurants, take an intercity train or attend cultural events only if they have proof of a booster jab.

Documentation of this booster jab will mean the pass stays valid.

The new guidelines will not mean a ban on unvaccinated travel, according to iNews, a valid negative test uploaded onto the Covid pass will be a second option for travellers who have had their second jab more than six months earlier.