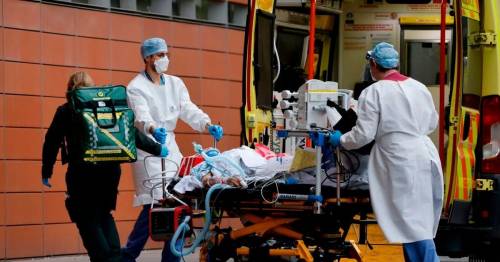 The number of Covid cases in the UK has increased by 44,917 as another 45 fatalities are reported.

It is the fifth day in a row that the number of coronavirus cases has risen by above 40,000.

It was a surge of 23% in a week for the number of cases, although deaths dropped by almost a fifth.

The previous Monday cases increased by 32,322, while fatalities were up by 57.

Today's figures come after The Mirror reported a more infectious strain of Covid-19 which may cause less symptomatic cases is spreading across the UK.

The Delta variant strain AY.4.2 accounted for around 12% of samples gathered in a recent government study, which ran up to November 5.

Cases of the sub-variant were growing at 2.8% a day, meaning it was spreading quickly across the UK.

It is thought to be 10 to 15% more infectious than other Delta variants, paving the way for it to become the dominant strain in the UK in several months.

On a more positive note, early research suggests that it may be less likely to cause symptomatic cases than previous iterations.

A Covid-positive patient on the ICU ward (file photo)
(

A two-dose series of the vaccine was 100% effective against Covid-19, measured seven days through over four months after the second dose, the company said.

The long-term data will support planned submissions for full-regulatory approval of the vaccine in the age group in the United States and worldwide.

A nurse prepares to administer the Covid-19 vaccine
(

Pfizer and BioNTech will seek clearance for a 30 micrograms dose of the vaccine for those aged 12 and above.

Previous : Man’s four-hour journey home took twelve after he was dumped waiting in the cold
Next : Human rights hearing on allegations of racial profiling of migrant workers caught in mass DNA sweep begins