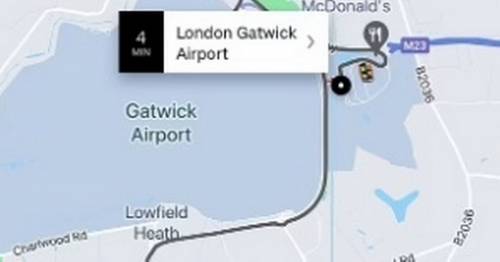 Uber has been accused of "robbing people" after a customer claimed the app tried to charge him £64 for a four minute journey.

Uber hiked its prices amid a spike in demand, as rail strikes took place this week.

But some, trying to get to work and school, complained about the hike in prices amid the cost of living crisis.

One customer tweeted: "Talk of cost of living, something needs to be done about companies like @Uber robbing people blind.

"Queues at Gatwick due to train strike at 1am and they want to charge £64 for a 4 minute journey #inflation #CostOfLivingCrisis #uber #holiday #trainstrike."

One customer tweeted this photo of their four minute journey

Uber Support replied to the tweet saying: "Hi there, we're ready to look into this. Please DM us the mobile number and email address linked to your account along with some additional details about your issue so that we can assist you better."

Another Twitter user wrote: "@grantshapps @MayorofLondon @BorisJohnson Why is @Uber drivers charging +double amount ( £ 35 for £15) for same distance due to #RailStrikes My son has has to take Uber to go work due to strike. @bolt gets crashed! Why should common people pay the price of this? @Keir_Starmer."

Another who hit out at Uber

Uber hiked its prices amid a spike in demand, with a three-mile journey from Paddington to King's Cross in London estimated to cost £27 at 8.45am on Tuesday.

An Uber spokesperson told The Mirror: “As a result of the strike action currently taking place on the National Rail and London Underground networks this week, we have capped the level that prices can surge, and all users are shown the price of their trip before they book.

"We are also working hard to ensure that there are enough drivers out on the road to match demand.”

The largest rail strike for a generation caused severe disruption on Tuesday, with more cancellations happening on Wednesday.

Many passengers' journeys took several hours longer than normal, while those who chose to travel by car instead were greeted by a surge in traffic.

Strikes are also underway today and planned for Saturday.

The unions should call off the rail strikes "as quickly as possible", Downing Street has said, while saying it was up to them whether to go ahead with Saturday's action.

A No 10 spokesman said: "My understanding is there were talks between the RMT (Rail, Maritime and Transport union) and Network Rail today.

"But what we want to see is for the unions to call off the strikes, to continue to negotiate and to come to an agreement with their employer.

"We don't want to see this strike action to continue for a moment longer than it has to."

Asked if this was possible before Saturday's strike, he said: "That's a question for the unions."

The Government has not been informed of any further rail strikes after this week, the official said.