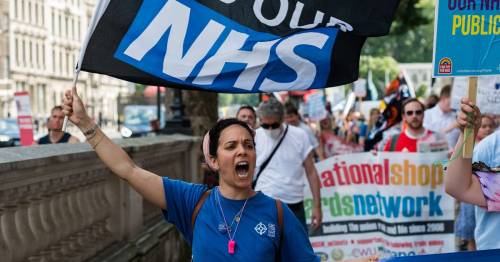 From the police to teachers to NHS staff, they all helped guide the country through one of the most challenging periods in its history.

The Government had the opportunity this week to acknowledge their dedication.

It declined. Instead it froze the pay of police officers, teachers and civil servants.

Even the 3% pay offer to NHS workers will prove a real-terms pay cut if, as forecast, ­inflation rises to 3.7% by the end of the year.

To rub salt in the wound, Downing Street admitted today there was no extra money for the wage increase and that it will have to come from existing NHS budgets.

Do you agree? Join the discussion in the comment section

This will inevitably mean cuts that could harm patient services. Staff will become yet further demoralised and overworked.

Boris Johnson last year took a free holiday in Mustique that cost more than a teaching assistant earns in a year. He clearly has no idea how tough life is for many public servants.

Instead of recognising the sterling work they have done over the past 18 months, he has treated them with typical Tory disdain.

Disruption caused by the pingdemic is the fault of the Government alone.

Having failed to close our borders to stop the Delta variant entering the country, it then failed to plan for the consequences of hundreds of thousands having to self-isolate.

As a result, some supermarkets are running short of goods, firms are having to stop production, some bin collections have been suspended and petrol stations have fuel shortages.

The Government was blindsided by this crisis and has no clue how to resolve it.

The great summer of sport continues tomorrow as the Tokyo Olympics begin.

This is a golden opportunity for a Team GB brimming with medal-winning talent.

We wish them the best of luck as they swim, jump, box, run, row, dive and cycle for Britain.