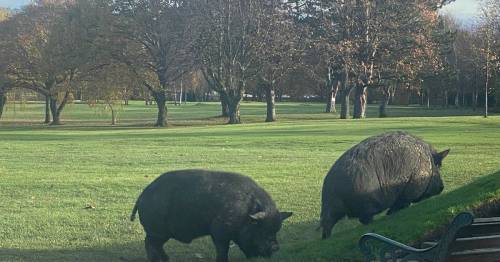 Two people have been injured after two large pigs charged on to a golf course and caused chaos.

The hogs stormed the green at the Lightcliffe Golf Club, Calderdale, West Yorkshire, knocking over bags on the way.

Club professional David Mckidd, 40, said the two black pigs were first spotted on the course on Sunday, when they injured a golfer by causing cuts to his leg.

They later returned on Tuesday and injured a male worker at the club who had attempted to usher them off the course.

Both people suffered minor injuries on their legs and were treated in hospital for protection against tetanus, Mr Mckidd said.

The golf club had to be closed after the incident
(

The pigs damaged one of the greens by digging small holes before being caught by police on Knowle Top Road yesterday.

The club was forced to close last night for safety measures but has since reopened.

Police were called to reports of two pigs on the loose
(

"Officers attended and assisted in securing the pigs before being returned to their owner."