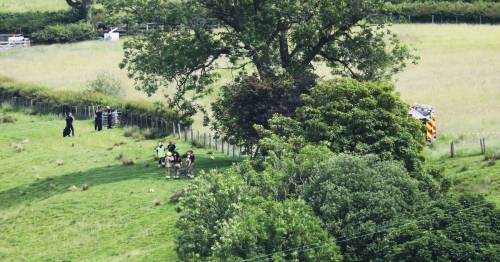 Two people have been confirmed dead after a helicopter plunged from the sky and crashed into a field today.

A North Yorkshire Police spokesperson confirmed the tragic news after the chopper went down on the edge of the picturesque Yorkshire Dales.

The horror took place near to a holiday cottages site shortly before midday today.

Fire crews and the Yorkshire Air Ambulance Service were also scrambled to the scene as video captured the emergency helicopter taking off from a field.

A spokesman for North Yorkshire Police said: “A full investigation is under way into the cause of a helicopter crash near Ingleton.

“The incident happened shortly before midday in a field off Bentham Road near Burton in Lonsdale.

“Two people were sadly killed as a result of the crash. Their families are being supported by specially trained officers.

“There is a full road closure at the A65 and at the junction of Bentham Moor Road.

“People are urged to continue to avoid the area.

“We thank local residents for their patience and co-operation.”

The helicopter is understood to come down in a field near the Rivers Edge Caravan Park.

Resident Ben Slinger, 35, said locals were told there was a pilot and at least one passenger onboard.

He said he’d spoken to other locals at the scene who believed police and fire crews were searching for an individual who may have 'bailed out' before the helicopter went down.

He said: “The helicopter was on fire. We heard that the pilot was alive, but one or two other people were missing and may have bailed out of the helicopter before it crashed.

“I think police helicopters were searching for somebody. We went for a look as it’s only round the corner and somebody said that.

"The fire crew were searching up and down the fields, and there was a police helicopter with a thermal imaging camera.

“It certainly looked like they were looking for somebody. We could see the fire brigade searching the fields."

Ben said his attention was only drawn to the crash when an air ambulance arrived on scene after mid-day.

He said: “I didn’t hear anything. The first I heard was the ambulance. I then had a look round to see what was happening.

“We don’t get many helicopters landing round us. I sort of know the person who farms the field. My first concern was something happening to him.

“Then I found out it was a helicopter crash, which was a shock."

Previous : Monkeypox: The areas in the UK with reported cases as infections edge closer to 600
Next : Newborn baby found in wheelie bin among grass cuttings with umbilical cord attached