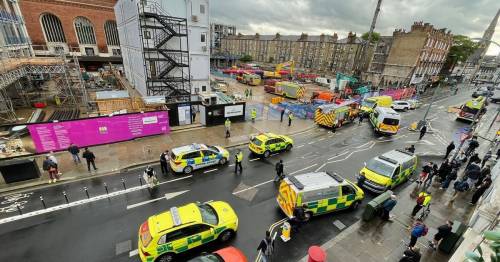 Two men are fighting for their lives in hospital after being injured after scaffolding on a town hall collapsed at a building site in West London this afternoon.

Emergency services rushed to the scene of the incident in King Street, Hammersmith at around 5.30pm.

Officers, paramedics and fire crews arrived to find two men with potentially life-threatening injuries after being hurt when scaffolding collapsed on the site. They have both been rushed to hospital.

Dozens of emergency vehicles were seen descending on the scene of the serious incident.

A spokesperson for the Met told MyLondon: "An investigation has been launched after two men were injured after scaffolding attached to Hammersmith town hall collapsed late on Wednesday afternoon.

"Officers from the Metropolitan police along with firefighters."

A spokesperson for LAS said: "At 17:41hrs on Wednesday, 11 May police were alerted to an incident at a construction site in King Street, W6. Officers attended to assist the London Ambulance Service and London Fire Brigade.

"Two men were found with potentially life threatening injuries and were taken to a central London hospital. The Health and Safety Executive has been informed.

The London Air Ambulance landed in a nearby park to the construction site incident on Kings Street.

Following the collapse of a scaffolding structure the Air Ambulance landed in Furnival Gardens, Hammersmith, this evening (May 11).

Two men are currently being treated for possibly life-threatening injuries after the structure attached to Hammersmith Town Hall collapsed.

It was attached to Hammersmith Town Hall and MyLondon understands this to be part of their new 'Civic Campus'.

The new space offers new homes, a cinema and a Council building on Kings Street.

Enquiries into the incident are ongoing.

Hammersmith and Fulham Council have confirmed that the two men who suffered potentially life-threatening injuries were working on the new Civic Campus build.

They have said that they are not currently in control of the building work and wished the two men their best wishes.

The statemant said: "We are sorry to report there has been an accident on the Civic Campus construction site. The site is currently not under H&F’s control (it is managed and operated by the construction company) so it is hard to glean exact information.

"We understand there are currently two injuries. The London Ambulance Service and London Fire Brigade are on the scene. Road closures are in place along King Street.

"Our thoughts are with those injured, their colleagues, friends and family. Further updates to follow."

Previous : Police to investigate woman who ‘hit black boy, 12, with paddle’ after public backlash
Next : Max Verstappen worried over “hit and miss” Red Bull as he calls for consistency