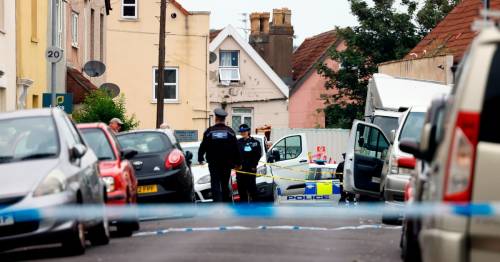 Two men have been charged with murder after the discovery of two bodies in a home.

Ionut-Valentin Boboc, 21, and Jacob Bebe Chers, 45, both from the Fishponds area of Bristol, were remanded in custody to appear at Bristol Magistrates' Court on Wednesday.

Police attended an address in Wood Street in Easton, Bristol, on Sunday following information from a member of the public.

The bodies of two men were found inside the property.

One neighbour said the road smelt so bad he poured disinfectant in the drain by his front window to get rid of the odour, BristolLive reports.

The deaths of the two men are being treated as suspicious and forensic post-mortem examinations are being carried out.

Police originally arrested three men, aged 21, 37 and 45, and an 18-year-old woman on suspicion of murder.

These people were arrested within a few hours of the bodies being discovered.

But police confirmed later in the day that the teenager and the 37-year-old were both released without charge, and Chief Inspector Deepak Kenth said the pair continue to help police with their enquiries.

Police arrested four people within hours of discovering the bodies, although only two have been charged
(

Detective Chief Inspector Mark Almond, of Avon and Somerset Police's major crime investigation team, previously said: "We know this news will come as a terrible shock to those living in the local community, but we'd like to reassure the public that a full and thorough investigation is already being carried out into what we currently believe to be an isolated incident.

"We're urgently making inquiries to identify the two men who have tragically lost their lives and locate their next of kin as soon as we can.

"There will be a heightened level of police activity in and around this property in the coming days and a cordon remains in place at this time.

"We'd like to thank the local community for their patience and understanding as we continue our work at the scene of this appalling incident.

"Additional reassurance patrols will be carried out in the area and we'd encourage any residents with fears or concerns to speak to an officer from their local neighbourhood policing team."

Officers and police staff are reviewing hours of CCTV footage, taking statements and carrying out other inquiries as part of the investigation.

Forensic examinations at the scene in Wood Street are expected to continue for several days.

Searches have taken place in other areas, including the Coombe Brook Valley in Fishponds.

Anyone with information is asked to contact Avon and Somerset Police on 101, giving the reference number 5221211938.