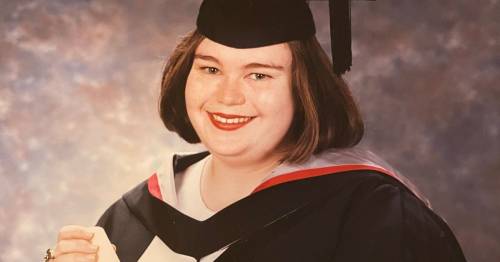 Super slimmer Harriet Peacock has revealed how she was forced to shed 20 stone after being pelted with food in the street.

Online tutor Harriett, 46, said she was taunted with cruel jibes and even pushed over by strangers as her weight spiralled out of control.

She said: “Being very overweight had a huge impact on my mental health.

“The fat-shaming I would endure was soul destroying. One time a group of men pushed me over and to add to the humiliation, I couldn’t get back up.

“Another time a milkshake was thrown at me in the street. These incidents just pushed me further towards my comfort – food.”

At more than 33st Harriet Peacock, 46, was the target of cruel jibes from strangers

At her heaviest Harriet, from Bedford, Bedfordshire, weighed more than 33st and struggled to even put her own socks on.

She has told how she gorged on crisps, loaves of bread and cake as she struggled with the stress of switching jobs from a school teacher to an online tutor.

Harriet said she would even buy takeaways and lie to people about what she’d had delivered because she was so embarrassed by the sheer volume of food.

She said: “I used to order Chinese food, but lie and say I had friends round as I ordered so much, when really I was ordering it all for myself.”

Harriet’s health deteriorated and she couldn’t drive because she could not fit behind the wheel.

Harriet is training to become a Slimming World Consultant herself and says she wants to be ‘the encouragement my friends at group gave to me.’

She says: “I had been overweight my whole life, but things really ramped up when I made the switch from teaching in a school to becoming an online tutor. I became very withdrawn and only wanted to associate with people I trusted.

“I poured my heart and soul into my students, which often left me exhausted and reaching for the nearest takeaway when I finished work.

“I snored loudly and slept terribly, which only added to my tiredness.”

Harriet contacted her GP in a desperate cry for help but claims she was “looked up and down” and told to “exercise more and eat less”.

It was not until her sister, Alison, 48, encouraged her to join Slimming World that Harriet found the courage to change her life forever.

Now instead of cakes and takeaways she cooks baked feta pasta, salmon fillets or homemade curries.

And she has been named Slimming World’s Greatest Loser, a competition that celebrates the success of the member with the biggest weight loss.

She said: “Joining Slimming World challenged me to start cooking more. I now love cooking so much.”