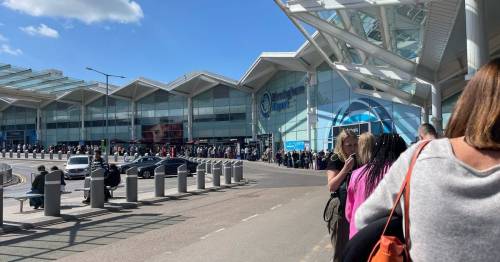 Travel giant TUI has apologised to passengers who got stuck in a huge queue so big it snaked out of the front door of a UK airport.

The enormous line of customers was the latest problem to hit Birmingham Airport, with passengers reportedly forced to wait hours to clear security today amid a staffing crisis.

One frustrated TUI passenger took photographs showing the massive queue at around 11.30am this morning, Birmingham Live reports.

TUI confirmed the issue was due to a delayed flight to Cape Verde and apologised to affected travellers.

Earlier this week, the airport's CEO confessed that travel chaos will continue for several weeks due to a 12-week "lag" between recruiting new staff.

The long queues were reportedly caused by a staffing crisis
(

A spokesperson said: "We can confirm that, as a result of a delayed TUI flight to Cape Verde, some customers experienced longer queue times at Birmingham Airport this morning.

"We would like to apologise to those customers affected and thank them for their patience and understanding." It was the last thing the airport needed after a testing few weeks caused by rocketing passenger demand prompted by the easing of covid restrictions, coupled with a lag in training and deploying new staff.

Speaking to BBC Radio WM, he blamed a 12-week "lag" between recruiting new employees and making them operational. He said: "It's still the legacy of the industry being turned back on by the Government's removal of the rules in mid-February."

Mr Barton added: "It didn't get very much traction because, until the industry started to show it had a future, a lot of people didn't want to come and start their careers with us. We got well underway with recruitment in February but, because we need to have them security-cleared, only then can we start training them. There's a lag of around 12 weeks.

"We are seeing a rapid recovery in aviation, which is a blessing, but it's catching up with the staff to make sure we can get back to our normal very good service levels. Well over 99 per cent of people caught their flights this weekend against that incredibly busy backdrop. We have now recruited all the people we need for the next three months.

"They're in training, that's the key thing. They are not available for use until we've gone through the full training process. By the end of May, we should be in a much better place in terms of that resource. The key thing [for passengers] is to turn up when their airline says to, not earlier."

In its latest statement, a BHX spokesperson said: “As always, our message to departing customers is: Help us help you keep queues moving by removing any liquids, gels, pastes and electrical items from your bags before our security x-ray scanners."