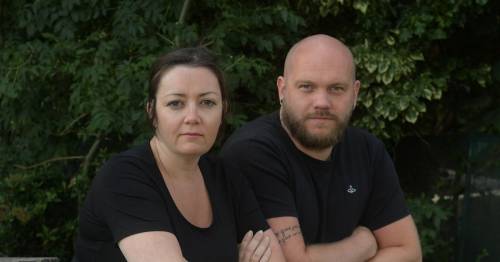 A couple who enjoyed a trip to Lanzarote to celebrate the imminent arrival of their first child were left fuming when their flight home was cancelled.

Seven-months pregnant Ceri Burns and Chris Goulding, from Solihull, were first told the plane would be delayed by an hour when they arrived at Lanzarote's César Manrique-Lanzarote Airport.

Their wait quickly descended into chaos as stranded passengers started arguing with Tui staff as it became clear they would not be flying home.

The issues come after months of nightmare journeys experienced by passengers, including long delays and cancellations.

Chris said: "Passengers started getting upset and arguing with staff as it became clear those in the pen were not going to be boarding, Birmingham Live reported.

Fed up passengers waiting for the plane home

Their flight was delayed and eventually cancelled

“We were then told the plane had departed and we had not even got to scan our boarding pass. I asked the TUI rep to scan our pass as we had no idea whether [our luggage] was on the plane or in the trolley on the runway.

"She returned to glumly say it was on the plane on its way to Tenerife. We were promised it would continue to Birmingham and it would be there the following day."

Ceri and Chris were put up in a Lanzarote hotel but said there was no food or drink available as facilities had closed for the night. They claimed TUI said they would be reimbursed if they booked an alternative flight.

The couple had taken the babymoon trip to Tenerife

Chris added: "Unable to even get changed as our luggage was MIA, we showered and freshened up as best we could by borrowing deodorant from other stranded passengers and got a taxi to the airport. We boarded our flight and got home.

"When we returned to Birmingham Airport to collect our luggage after both flights from Tenerife and Lanzarote had come in we were informed by airport staff our bags weren't there."

The couple’s bags were eventually delivered to their home and now they are hoping for compensation as they had to splash out on taxis and different flights.

The couple are hoping for compensation
(

"We're trying to get a refund from TUI but they are saying they don't recognise our booking reference," Chris said. "We also want reimbursement for the flights and taxis we had to book. I've lost complete faith in TUI."

A TUI spokesperson said: "We would like to apologise to Mr Goulding and Ms Burns for the change in their scheduled flight from Lanzarote to Birmingham on Sunday, June 12. We do understand how disappointing and frustrating delays can be.

Unfortunately, due to operational issues, we had to change aircraft which resulted in a new flight operating the following day. All customers were provided with overnight accommodation.

"However, Mr Goulding and Ms Burns made the decision not to travel on the re-scheduled flight and their luggage was therefore removed from the aircraft at Birmingham Airport."

Previous : ‘Beautiful’ UK island on sale for £1.75m with a castle, flock of sheep and a 42ft whale
Next : Man gets planning permission to build hidden underground tunnel beneath house