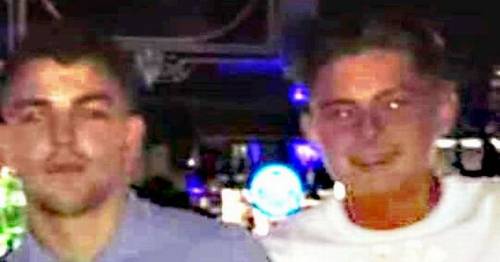 Two friends killed in a horror crash have been pictured for the first time.

Willy Harty, from Leeds, was in a white BMW with pals Lawrence James and Sam Connor when they collided with a Peugeot on the A63 dual carriageway on Monday night.

Dad-of-one Willy, who was expecting his second child, was killed in the crash along with friend Lawrence James and mum Alison Clark, 43, from East Yorkshire, who was in the Peugeot 3008.

Sam, who was in the white BMW, is in hospital fighting for his life, Humberside Live reports. Another two men also died when the vehicle burst into flames.

Alison's heartbroken husband Rob Clark said her sudden death has been devastating for him and their nine-year-old daughter Emily.

The pair were in a white BMW with other friends

He described his wife as a "beautiful soul" and his "guiding star, love and best friend".

He continued: "It is like having your heart ripped out. I can't comprehend it. I keep expecting her to walk through the door. I feel a tremendous sense of loss.

"She was a warrior when it came to looking after people's interests, including our daughter's

Willie's childhood sweetheart also wrote: "Please God I ask why have you done this to me? I loved you with all my heart Willie. You loved me. We were together nine years.

"We had a beautiful baby girl. She was your life. There were only six weeks left for our new baby girl."

A tribute to Lawrence, from Leeds, said: "Rest in peace Lawrence James. Keep his little girlfriend in your prayers. They are supposed to be getting married.

"Pray for his family in this hard time. This world is so evil."

While a friend of Sam's added: "Keep Sam in your prayers. He definitely needs them. Don't let another family be destroyed and pray harder than ever for complete and full healing."

Tributes have poured in for the tragic victims

Delivery driver Gioele Barresi claims he was overtaken in his van by a white BMW which was coming off the roundabout at the B1231 Melton Road junction "fast and in the wrong direction".

He said the vehicle was heading the wrong way onto the A63 and collided with the grey Peugeot.

"I was going about 60 with the van and he passed me on the other side like I was slow. Maybe 10 seconds from that he hit the other car," he told Yorkshire Live.

Previous : Man so overweight he couldn’t walk to post box loses 15 stone without working out
Next : Jessie J in tears during emotional performance a day after tragic miscarriage